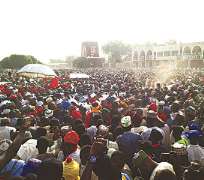 The Emir of Kano, the late Alhaji Ado Bayero, was Friday laid to rest in his ancestral home called Gidan Sarkin Nassarawa in the ancient city of Kano, with thousands of sympathizers thronging the venue of his interment.

Bayero last journey to his final resting abode commenced by 4pm shortly after the Firdau prayers performed by the chief Imam of Kano Central Mosque, Dr Zaharadeen that was attended by multitude at the emirs's palace.

The late Emir passed on in his palace in the early hours of Friday, according to Walin Kano, Maje Bashir Wali who had on Radio broadcast officially announced the demise of the octogenarian emir in his palace, urging the city dwellers and well-wishers to solace in God.

In his reaction, President Goodluck Jonathan expressed sadness and a deep feeling of great national loss over his demise, which according to the Special Adviser to the President on Media and Publicity, Dr. Reuben Abati, in a press statement, said that the President, on behalf of himself, his family, the federal government and the people of Nigeria commiserated with the emir's family and all the people of Kano, over whom the departed Emir presided illustriously as traditional ruler for more than half a century.

'The President joins them in mourning the monarch, whose uncommon leadership qualities and evident faith in the peace, unity, progress and prosperity of Nigeria combined to make him one of the most respected traditional rulers in the country during his long and very successful reign.

'The President believes that Bayero will always be remembered and honoured by the people of Kano and all Nigerians for his immense wisdom and competence as a traditional ruler, as well as for using his exalted throne to build bridges of unity, friendship and harmony across the nation,' the statement said.

The President reaffirmed his declaration on the occasion of the late emir's 50th anniversary celebrations last year that Bayero was one of the most decent and respectable Nigerians he has had the privilege of interacting with, and he will always treasure pleasant memories of their last meeting earlier this year.

He prayed that the Almighty Allah would receive his soul and grant the good people of Kano a worthy successor, who would carry on his good works and wise rule for the well-being and benefit of all Nigerians.

In his reaction, the Senate President David Mark described his passage as  a big blow and a monumental loss to the nation. Mark lamented that Bayero departed at a time when his wise counsel would have been needed to navigate through the nation's trying times.

'Ado Bayero was a peacemaker. He made Kano home for all. He was accommodating. He preached love, unity and good neighbourliness. He was adetribalised leader who made the nation his constituency.'

Mark therefore urged Nigerians, especially the present crop of leaders, to emulate the great virtues of patriotism, philanthropy, honesty and good leadership quality which the Bayero was known for.

He sympathised with the government and people of Kano State, especially the bereaved family, even as he urged them to take solace in the fact that Bayero lived a successful and truly accomplished life worthy of emulation.

Similarly, Northern States Governors Forum said the death of the Emir of Kano, Alhaji Ado Abdullahi Bayero, was a monumental loss to the entire nation.

The Chairman of the Forum, Dr. Muazu Babangida Aliyu, in a condolence message in Minna said the region and indeed the nation has lost one of its foremost and forthright monarchs.

He said the late Emir was a fountain of experience, who exuded wisdom and was a father to all regardless of ethno-religious affiliations.

The message signed by Aliyu Chief Press Secretary, Israel Ebije reads, 'The North and Nigeria will miss his contribution especially now that the country needs people of his calibre to chart a better future especially in the area of security.'

The Forum condoled with the governor of Kano State, Alhaji Rabiu Kwankwaso, for the loss, urging him to embrace the Emirs death as the will of Allah.

The statement reads, 'The passing away of the Emir of Kano is indeed sad for the entire Northern states and Nigeria. We will remember him for his humility, truthfulness on issues, determination to serve the country and above all his religious chastity.

'For us in the Northern states, the Emir of Kano was an encyclopedia, reflecting every module needed to chart a better roadmap for the North based on his wealth of experience.

'We must work towards fulfilling his wish of seeing a united Northern Nigeria. We must emulate his dream of a peaceful, united and prosperous Nigeria by placing the collective interest of the Northern states and Nigeria above individual interests.'


Bayero who would have been 84 next month, celebrated his Golden Jubilee in June last year. The son of Abdullahi Bayero, the former emir who reigned for 27 years, he ascended the throne in October 1963 as the 13th Fulani emir.

Kano State Governor Rabiu Kwankwaso, who left the venue of the Nigerian Governors' Forum (NGF) retreat in Port Harcourt, was joined by his Adamawa and Sokoto counterparts – Murtala Nyako and Aliyu Wamakko- in Kano for the interment.

Kwankwaso's deputy, Umar Ganduje, had earlier told journalists, while formally announcing the death of the emir, that Bayero died about 4a.m.