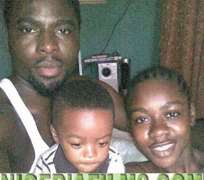 Yinka Solomon, former girlfriend of popular Yoruba actor, Ibrahim Chatta, is set to marry later in the year to her new man.

She also recently expressed regrets meeting Chatta, stating that she has leant her lesson and has decided to get along with her life with her new found love who she would be settling down with in August.

Yinka however did not reveal the identity of her new man.

She started an affair with Ibrahim in 2007, moved into his apartment in 2008 and later got pregnant for him. Yinka accused the handsome actor of being a womanizer and a gold digger who never cared about anything, but relied on her to survive.

Ibrahim later married the daughter of a former governor of Kwara State, a union that has since reportedly crumbled.