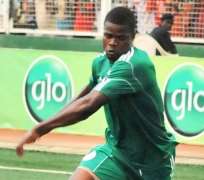 Super Eagles left-back, Elderson Echiejile will undergo scan to ascertain the seriousness of the knock he picked up during Nigeria's international friendly against Greece.

Echiejile limped off in the 41st minute of the Super Eagles' 0-0 draw against the Ethniki at PPL Park (Chester, Pennsylvania) on June 3.

The AS Monaco defender was duly replaced by Kunle Odunlami and head coach of the Nigeria national team, Stephen Keshi has now taken the time to discuss the current state of Echiejile.

'Echiejile has an appointment with the doctor and an MRI scan will be conducted on Thursday. We'll probably know the extent of the injury after the scan.

'It's only after the scan has been conducted that we will know the extent of the damage,' Keshi told journalists after the team's first training session in Jacksonville, United States.

Keshi and the Nigeria medical staff will be sweating over the latest injury setback as Echiejile who was part of the Super Eagles' 2010 World Cup squad is the team's first-choice left-back.

He has been capped 39 times by Nigeria at senior international level.