Chime approves N3bn for ICT in new secretariat, others 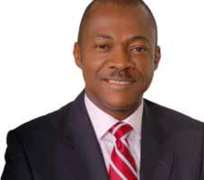 The Enugu State Executive Council has approved about three billion naira for the execution of various projects in the state, including the provision of communication technology facilities at the new workers' secretariat and the new Governor's office building in Enugu.


Briefing journalists on the outcome of the Executive Council meeting held at the Government House, Enugu the State Commissioner for Information, Mr. Chuks Ugwoke said the facilities in the offices of the Secretariat and the Governor's Office will gulp 2.7 billion naira.


Mr. Ugwoke noted that the project which would involve procurement and installation of sundry components was aimed at providing more conducive working environment for enhanced efficiency and productivity of workers.


He further said that the council also approved the award of contract for the supply and installation of audio-visual conferencing solution and integrated electronic documentation management system for the Executive Council Chamber of the new Governor's Office.


Commissioner Ugwoke noted that the Executive Council also gave approval for the supply and installation of furniture at the State Governor's Lodge, Asokoro, Abuja as part of the on-going renovation of the facility by the Government.


He explained that the project which would cover the Governor's wing, Deputy Governor's wing, main entrance lobby as well as offices and quarters for other support staff, would cost the government N78.46 million naira.


According to the Commissioner, the council, in its bid to ensure improved teaching and learning of core science subjects in all the public secondary schools in the state, further approved the award of contract for the supply of science equipment on the three main subjects of Biology, Chemistry and Physics to the remaining eighty-three secondary schools in the state.


In line with the huge investments made by the state government in the refurbishment of the Nnamdi Azikiwe Stadium, Enugu, the Information Commissioner said that the state Executive Council gave approval for the provision of a 1,000 KVA generating set at the Stadium to illuminate it for evening and night activities, as well as provision and installation of Public Address System to handle the high noise volume of the Twenty five thousand capacity Stadium.


Mr. Ugwoke explained that the two separate projects which would cost the state government the sum of one hundred and twenty-four point three-four million naira would go a long way in raising the standard of the stadium for hosting both local and international sports competitions.


He recalled that the government had on taking over of the facility stressed its commitment to enhancing its infrastructure to meet international requirements.


The Commissioner said that that Governor Sullivan Chime used the occasion to thank the good people of Enugu State for coming out en-masse to participate in the just concluded continuous voter registration to be eligible for voting and electing leaders of their choice during the forthcoming elections in the country.


Commissioner Ugwoke was accompanied during the Press briefing by his colleagues including the State Commissioner for Finance, Mr. Godson Nnadi, Commissioner Chijioke Agu of Youths and Sports as well as the Special Adviser to the Governor on Inter-Government Affairs, Rita Mbah.