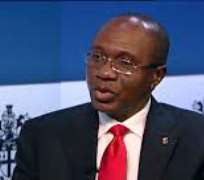 -The Central Bank Governor (CBN), Mr Godwin Emefiele, on Thursday assured Nigerians that the apex bank would focus on gradual reduction in interest rates under his leadership.

Emefiele gave the assurance at a news conference to outline his policy focus as the new CBN Governor in Abuja. Emefiele who assumed office on Tuesday is the 11th CBN Governor.

He replaced the former Governor, Malam Sanusi Lamido Sanusi, who was suspended from Office by the president before the expiration of his tenure. 'We shall pursue a gradual reduction in interest rates.

'A comparison of selected macro-economic aggregates from some emerging market countries, including South Africa, Brazil, India, China, Turkey and Malaysia indicate that Nigeria has one of the highest Treasury Bill rates.

He said that to enhance financial access and reduce the cost of borrowing credit, there was the need to pursue policies targeted at making Nigeria's Treasury Bill rate more comparative to other emerging markets.

'The bank will also begin to include unemployment rates as one of the key variables considered for its monetary policy decisions. 'In the interim, we will continue to maintain a monetary policy stance, reflecting the liquidity conditions in the economy as well as the potential fiscal expansion in the run-up to the 2015 general elections,'' he said.

On the exchange rate policy, he said the key goal would be to maintain exchange rate stability in view of the high import dependent nature of the economy and the significant exchange rate it passed through in recent years. According to him, a systematic depreciation of the Naira would literarily translate to considerable inflationary pressure with attendant effect on macro-economic stability.

'To support this strategy, we will strive to build-up and maintain a healthy external reserve position and ensure external balance,'' Emefiele said. The new CBN governor explained that there was no doubt that reducing the interest rate and maintaining the exchange rate was a daunting twin goal.

'In this pursuit, the bank will work with all stakeholders to device measures to ensure the goals are achieved.' On Financial System Stability, he said the bank would continue to sustain the effective management of the potential threats and avoid systemic crisis.

'The core of my vision is to effectively manage potential threats to financial stability and create a strong governance regime that is conducive for financial intermediation, innovative finance and inclusiveness.

'In this regard, we hope to anchor on two pillars of management factors that create liquidity shocks and zero tolerance on practice that undermine the health of financial institutions,'' he said.

To achieve the goal, Emefiele said the bank would work with stakeholders to aggressively shore up the reserve and also engage both the fiscal and political authorities.

He assured Nigerians of enhanced banking supervisory purview over the banking system and strengthening of risk-based supervision mechanism to ensure overall health and banking system stability.

Emefiele said he would create a Central Bank that is professional, apolitical, people focused and a bank that would dissipate its energies on building a resilient financial system to serve growth and development needs of Nigerians. (NAN)