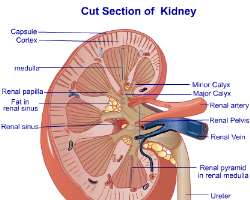 During this year's World Kidney Day, which was marked on March 11, 2010, medical experts in the country raised the alarm over increasing cases of kidney failure. They said that the condition afflicts about 45,000 Nigerians. New cases were estimated to be between 14,000 and 15,000 every year.

The total number being managed in the country stands at about 1,000. It is also likely that some of the patients are not managed by experts, while some erroneously blame the condition on witches or other supernatural causes.

The upsurge in cases of renal failure has been blamed on lack of awareness on the part of patients, and the general health practitioners.

There are about 50 dialysis centres in the country and most of them are located in urban areas. Those down with the condition are required to undergo between two and three dialysis in a week and a session costs between N20, 000 and N30, 000.

Some of the symptoms of the disease are coloured urine, frothy urine, nausea/vomiting, loss of appetite and headache. Others include itching, swollen legs/eyelids, breathlessness and dry flaky skin. The high risk factors of the disease are diabetes, hypertension, family history, and obesity. Those with one or more of the high risk factors should check their kidney function. Africans, African Americans, Asians, Hispanics, Pacific Islanders, Native American or Australian Aboriginal and Torres Strait Islanders are predisposed to the condition.

In spite of its spread, nephrologists said that early detection of the disease increases the chances of recovery. However, there are certain rules to observe to make the kidneys healthy. Medical experts advice that people should keep fit and active by increasing their daily physical activity, keep regular control of their blood sugar level, blood lipids and anemia. They should also monitor their blood pressure, and reduce it if necessary.

People are encouraged to eat healthy and keep their weight in check. They should not smoke and not take over-the-counter pills on a regular basis.

In view of the enormity of the disease, the Federal Ministry of Health and its State and Local Government counterparts should come out with measures to tackle the increase in cases of kidney failure. A mechanism to check the health of kidneys should be made available and accessible in all parts of the country.

Since most of the dialysis centres we have now are in urban centres, there is the urgent need to ensure that some of them are located in rural areas. There is need for enlightenment on the causative factors of the disease, preventive measures and how to access treatment.

The high cost of managing the condition has made it imperative that the government can come to the aid of those down with kidney disease, especially those that need transplant. In most cases, the patients rely on the public to source for the exorbitant treatment costs. And relying on the public is not the best way to source for funds in an emergency situation like renal failure.

In the past, public-spirited officials had picked the bills of some patients but such officials are in very short supply. We urge more wealthy Nigerians to show concern to the plight of people on death row as a result of one debilitating disease or the other. Rich people should be willing to pick the medical bills of their less fortunate compatriots.

There is the urgent need too to increase the number of hospitals where kidney transplant can be done in the country. A situation where only three hospitals are s addled with this task is unacceptable. Having more of such centres will considerably reduce travelling overseas for kidney transplant.