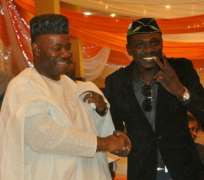 Up and coming South South comedian, James Emmanuel Essien aka Pa James, has decided to honour children at the motherless babies home in his state, during his birthday.

The fast rising comedian who was a year older on the second of June, 2014, stormed the Special Children's home which is located close to the E-library, in Akwa Ibom state, with lots of gift items along with some friends and dancehall artiste, Pastor Goody Goody who spiced up the occasion with some of his kids track songs to entertain the kids.

According to Pa James, children are gift from God and as such, once they are being neglected and someone decides to take care of them, it is important that we try to contribute to their up keep also.

It is not easy for a woman to walk nine months with pregnancy, give birth to the child and decide to abandon him or her. People just need to respect God and do things the right way, he added. I HAVE A BEAUTIFUL BODY,WHY WON'T I FLAUNT IT--ACTRESS UCHE OGBODO