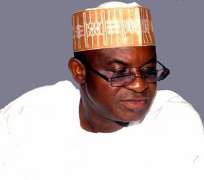 The Senate yesterday confirmed the re-appointment of four members of the CBN Monetary Policy Committee.

Their confirmation followed the approval of the recommendation of the report of the Senate Committee on Banking, Insurance and other Financial Institutions which screened them.

They were confirmed after scaling through the screening conducted by the Senate Committee on National Identity Card and National Population.

Senate President David Mark urged them to assist the commission to resolve the controversy surrounding the population figure.

'I hope that they would help to bring something on board so that we can know our true population in this country.'