EXCLUSIVE: I Am Not Running For Senate In 2015—Yemi Solade Tells Nigeriafilms.com 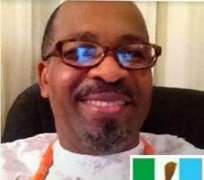 Contrary to several online reports that veteran actor, Yemi Solade is eyeing the Senate in 2015, Nollywoodgists.com can authoritatively inform you that it is not true.

Speaking with your reputable news platform over the phone when contacted on Tuesday on the matter, the highly gifted actor explained to Nollywoodgists.com that the picture was designed by someone who went to the same higher institution he went to, Obafemi Awolowo University, Ile-Ife, Osun State and stated categorically that he is not nursing such political ambition.

'My brother, I am not running for any political post and nobody is pursuing me. The thing (picture) has been in circulation, it is just a joke (probably referring to the controversial photograph). I am an actor and will remains so.

'Just let me continue to do what I know how to do (acting). I am a technocrat and have never run for any elective post in my life. I don't think I can plunge into the Nigerian political water.

'As I speak with you, my brother, there is nothing like that. It is just one of those things online people do. I am just saying these to you because you are the first serious journalist that has called me on this matter. I appreciate you for that. God bless you,' Yemi Solade told Nollywoodgists.com.