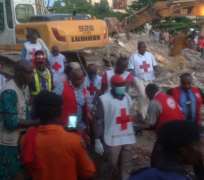 Four persons, all adult males believed to be workers on the site died while numerous students and parishioners who frequent the building thankfully were not affected. The day before the collapse some 300 students had reportedly used the building for a church event. Hundreds of students were playing in the vicinity of the building when it collapsed.

The collapse of the building occurred at exactly 1:30 pm at St. Christopher Anglican Church premises, along Old Cemetery Road, Onitsha in the Onitsha South Local Government Area. Within minutes the first responders from the Red Cross lead by Dr Katchy were on the scene followed by SEMA, SSS and police and local government officials. Rescue efforts commenced immediately and heavy equipment including four excavators arrived consequently from Julius Berger and other contractors to undertake the search and rescue exercise.

Gov. Willie Obiano who was away in Abuja on official business was informed of the accidents and ordered immediate intervention. Senior ANSG officials led by SSG Oseloka H. Obaze arrived at the scene and along with the CPS Tope Fasugba, Army Commander Col. AJ Fagge, Army Engineers Commander Col. Sango Aremu, Navy Commander Mike Oamen, SEMA Director Dr Justin Ijezie took charge of the rescue operation, assisted by officers of the FRSC, AVSS, and NSDC. LG Council chairman, Mrs Ann Chukwueke and her staff were also on hand throughout the rescue exercise.

On arrival, SSG Oseloka Obaze told the media that the priority was the conduct an efficient search and rescue mission and eventually recovery of any dead bodies. He characterized the "catastrophic failure of the building almost avoidable, if there had been full compliance with building codes." Mrs Chukwueke attributed the collapse on poor materials and supervision by the Anambra Urban Development Board (ASUDEB), which had responsibility for approving building plans.

On the whole, four adult male bodies were recovered from the site, the first at 5:48pm, the second at 6:40pm, the third at 6:50pm and the fourth and final body at 7:35pm The Police DPO confirmed that they had identified the victims, but would not release the names until the next of kins were informed.

As it got darker and lighting equipments were brought in by the Nigerian Army engineers, it was determined that the search had reached the bottom of the rubble. A decision was made to suspend the search at 8:10pm.

At 8:15pm the Secretary to the Anambra State Government, Mr Oseloka Obaze, the Chief of Staff to Governor Obiano, Prof. Joe Asike, SEMA Director Dr Ijezie, the Army and Navy Commanders, Police DPO, FRSC, Unit Commander, Onitsha, Red Cross and all the first responders present were met by the parish priest and church elders who thanked them for the quick response by the State authorities and emergency officials.

Thereafter SSG Obaze announced the decision to call off the search and recovery exercise and on behalf of Gov. Obiano whom he said was fully briefed on the rescue exercise, thanked all those who assisted in the rescue efforts. He said that the collapse was "a tragic incident that did not have to happen and that one life lost was one life too many." He also indicated that any further official pronouncement on the collapsed building will come later on.

Between 2012 and 2013 Anambra experienced a spate of building collapses, which compelled the government to set up a panel of experts to investigate the incidents and their respective cause and make recommendations. The panel submitted its report eventually but there was never a government White Paper on the report.

This recent building collapse was the first in Anambra State in 2014. The collapse happened at a time when the Obiano Administration was already reviewing the activities of ASUDEB in the state.