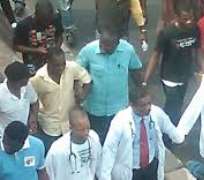 Resident Doctors have commenced a 3-day warning strike across the country over contentious issues of welfare of their members.

Also joined in the strike were members the Joint Health Sector Unions at the FMC, Yenagoa, over non-payment of promotion arrears.

According to reports across the country, the strike has effectively paralysed medical facilities in most of the states.

'We are complying with the directive to commence a three-day warning strike.

'It is a nationwide issue, but the strike by other categories of  health workers in the hospital is a local matter and is not related to our own,' he said.

NAN correspondent, who monitored the strike reported that out-patient wards were closed, as the patients were turned back by officials of the unions.

Mr Simon Bernabas, an executive of Joint Health Sector Unions at FMC, Yenagoa, said the unions were compelled to embark on a warning strike over non-payment of promotion arrears.

Bernabas said the unions regretted the hardship faced by members of the public, but appealed for understanding.

He said there was a total compliance as representatives of the various unions were going round to monitor compliance.

It was gathered that patients on admission were receiving treatment as some category of  health workers were rendering skeletal services to patients.

Also, resident doctors in Federal Government-owned hospitals in Lagos and Enugu states on Monday, began a three-day warning strike to protest some unresolved issues affecting them.

Abdullahi said at a news conference in Abuja, that  their grievances were based on residency training and  re-integration of the doctors into the Integrated Personnel and Payroll Information System (IPPIS).

NAN reported that some resident doctors at the National Orthopaedic Hospital, Igbobi, Lagos, were seen rendering skeletal services at the Accident and Emergency unit.

Dr Akintayo Akindele, the President of the Igbobi chapter of the association, told NAN that: 'We have withdrawn our services in areas such as clinics, ward rounds, theatre services, and casualty out patients' services.

'But, we are still rendering services in the areas of critical emergency and ward call services to alleviate the sufferings of our patients,' he said.

Also, Dr Olusegun Akinwotu, the association President at the Federal Neuro-Psychiatric Hospital, Yaba, said they had fully complied with the national secretariat's directive on the strike.

'So, since we are part of the national body, we have to comply with the directives,' he said.

In Enugu, the resident doctors at the University of Nigeria Teaching Hospital (UNTH), Enugu,  joined their counterparts in other states to embark on the warning strike.

President of the association, Dr Obinna Nduagubam, told NAN in Enugu that his members joined the strike as early as 8.00 a.m.

'We just started this three-day warning strike and after it, we will give the Federal Government another 25 days ultimatum to comply.

'By June 26, we will embark on an indefinite nationwide strike,' he added.

Addressing the press at the hospital, the President, Association of Resident Doctors, UCH, Ibadan, Oyo State, Dr Franklin Anor, said the strike was as a result of  failure of the Federal Government through the Federal Ministry of Health to endorse and formalise the report of the inter-agency Committee on Residency Training Funding and Policy.

'Residency training programme for doctors in this country is completely under-funded, which is not like that in other countries. It is just in Nigeria that the government has refused to provide adequate funds for residency training; which is a tool for effective practice of our profession. That is the fundamental issue regarding this warning strike,' he said.

He added that other issues surrounding the strike action included the Federal Government's failure to honour the terms of agreement signed with NARD on relativity in salaries of doctors and other health workers.

'If the government does not attend to our demands by 1st of July,2014 it is going to be an indefinite strike,' he

Channel Television reported that patients at the Lagos University Teaching Hospital, LUTH, are stranded as the doctors there enforced the strike.

A visit to the hospital revealed that although the resident doctors have withdrawn their services as directed by the national body, the action seemed not to be having much impact as nurses and consultants attended to patients.

Attempts to speak with the union leaders and management of the hospital proved abortive as they said they were not willing to speak on this development.

In Abuja, Nigeria's Federal Capital Territory, the strike was in force also, but the Spokesperson of the National Hospital, Dr Tayo Haastrup, said that the welfare package of resident doctors can be negotiated with the Federal Government without putting the lives of teeming Nigerians at stake.

Resident Doctors at the Federal Medical Centre, in Owo, Ondo State also joined their counterparts across the country.

We had an interview with the Chairman, Association of Resident Doctors in the hospital, Raymond Omotayo who highlighted the demands of the association from the federal government, noting that if the demands are not met by July 1, 2015, the Doctors will be forced to embark on an indefinite strike action.

All our efforts to speak with the Chief Medical Director of the hospital, Dr Femi Omotosho proved abortive as he was said to be out of the state and other senior officers in the hospital were not willing to speak to our correspondents.

Resident doctors in Rivers State were not left out in the strike as Channels Television visited the Braithwaithe Memorial Specialist Hospital in Port Harcourt, where patients were seen waiting to see doctors that were not available.