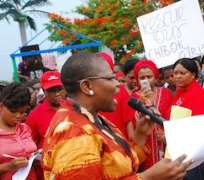 Protests by supporters of more than 200 schoolgirls kidnapped by Boko Haram have been banned in Nigeria's capital, Abuja, police said on Monday, as activists vowed to challenge the 'illegal' move.

Federal Capital Territory (FCT) police spokeswoman Altine Daniel confirmed the ban in a text message to AFP, saying the decision was taken 'because of security reasons'.

Protest organisers questioned the legitimacy of the move and eyed a possible political motive, but police chief Joseph Mbu said the ban was imposed because of the threat of infiltration from 'dangerous elements'.

'There is no basis for and no power of FCT Commissioner of Police to ban peaceful assembly of any group of persons in the city. [email protected] ALL,' said protest leader Oby Ezekwesili on Twitter.

'The decision to ban the protest is insane. We are going to court as soon as possible to challenge the ban,' added the group's lawyer, Femi Falana.

'It is illegal because a court of competent jurisdiction has ruled in December 2007 that no police permit is needed to stage a peaceful protest anywhere in Nigeria.'

Bring Back Our Girls spokesman Rotimi Olawale said that the protesters were 'unperturbed' and would meet again in the capital on Tuesday.

'We have been peaceful in our protest. We don't obstruct traffic or constitute ourselves to a public menace,' he added.