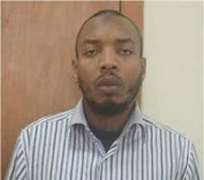 The Federal Government has dispatched one Interpol operative to secure the repatriation of the alleged mastermind of the April 14 blast in Nyanya, Abuja, Mr. Aminu Sadiq Ogwuche.

Mba said a high ranking Interpol operative had left Nigeria for Sudan with all the necessary documents to secure the extradition and that hopefully, the fugitive would soon be back in the country to face the law.

Also speaking at the briefing, Olukolade said the Federal Government had not seen any new video purportedly released by Boko Haram in which the abducted Chibok schoolgirls reportedly sought for urgent intervention of President Goodluck Jonathan.

Olukolade said, 'The video is not visible for Nigerians to see yet. Nobody has seen the video. We will try and see if we can get a copy of the video after which we will be able to respond to it.'

He said the main objective of military and coalition efforts was to rescue the girls alive and save them from the clutches of their abductors.

'The essence of every ongoing activity by the military and other paramilitary agencies concerning the Chibok girls is to get our girls back safely and the three things paramount include public interest, safety of the girls and the wider interest of winning the war against terror,' he said.

He added that five other suspected terrorists died in Mubi during an exchange of gun shots with troops who wanted to apprehend them during search operation.

Olukolade appealed to members of the public who would be watching the World Cup matches at viewing centres to be extra vigilant and report suspicious individuals to security agents.