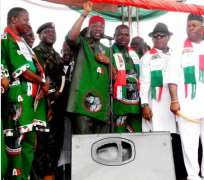 ''An Injustice Anywhere Is A Threat To Justice Everywhere''


As the whole world awaits the judgment of the three man Anambra State Guber Election Tribunal headed by Hon Justice Ishag Bello, all has not been heard of the role played by the Independent National Electoral Commission (INEC) before and during the said election

Renewed evidence discovered during the course of the tribunal has confirmed our earlier position that INEC was indeed partisan during the state governorship election. It should be recalled that Comrade Tony Nwoye's Campaign organization through both her Media Directorate and the ICT Department insisted on a total cancellation of the Nov 2013 election on the ground that the election was marred by tremendous irregularities which prevented party stalwarts like Prince Arthur Eze, Chief Josephin Anenih, our own candidate Comrade Tony Nwoye, his whole family and more than 13,450 PDP supporters from voting.

We exhausted all legal and diplomatic means to call the attention of INEC to these issues but INEC shut her doors on our face. The INEC team that supervised the voting exercise of Nov, 2013 and afterwards was a highly compromised team. None of them took oath of neutrality as demanded by the constitution which explained the actions of their staff especially the much publicized disgrace at Idemili South and Obosi where a self-confessed INEC Staff who absconded with the voting materials on the election day confirmed to the public that the election has indeed been rigged by the INEC to favor APGA. The best the commission did was to issue an apology to Anambrarians and ordered for more elections to be supervised by the same compromised team. In the light of this, We therefore ask, CAN INEC USE AN ILLEGALITY TO ENTHRONE A LEGALITY?

(2) All Electoral Officers, Presiding Officer, Returning Officer and staff appointed by the Commission taking part in the conduct of an election shall affirm or swear to an Oath of Loyalty and Neutrality indicating that they would not accept bribe or gratification from any person, and shall perform their functions and duties impartially and in the interest of the Federal Republic of Nigeria without fear or favour'

'The taking of the Oath is mandatory as the word 'shall' is used. The historical development of this section will show how important it is to the lawmakers. In BUHARI V OBASANJO (2005) 13 NWLR (P 941) 1 the Supreme Court held that non-compliance with the Oath is a serious irregularity which is not cured by Section 4(1) of the Oaths Act. Uwais JSC at page 137 G-H said:

'In my view, the provisions of the Oaths Act Cap 333 have no application to the election officials specified by section 18 of the Electoral Act. It follows that the provisions of section 4(1) of the Oaths Act, on the consequence of an omission by a public officer to take any Oath, must be read in the context of the Oaths Act, Cap 333 alone and cannot be extended to any other legislation in general, as was done by the Court of Appeal in this case. Therefore Tabai JCA acted in error when he held that the omission by the electoral officials to take the Oath of Loyalty and Neutrality had been cured by section 4(1) of the Oaths Act cap 333. Consequently the failure to take the oath is another irregularity, the effect of which, on the validity of the election, I will consider later in the judgment'

'Despite saying that, the law lord still did not invalidate the election on that ground and he stated his reason, on the basis of how the provision in the Electoral Act 2002 was drafted then. He explained his reason at page 181 par D of the Report thus:

'2.That there was no compliance with section 18 of the Electoral Act 2012 which directs that all the Electoral Officers, Presiding Officers and Returning Officers shall affirm or swear an Oath of Loyalty and Neutrality. However, neither the Electoral Act nor Oaths Act prescribes the Oath of Loyalty and Neutrality. So that it is not known exactly what this Oath is. If the form of the Oath is not known, the question is, how could it have been taken? Would the failure to take an unknown Oath have any effect? I do not think so'

'The above shows that if the Electoral Act had contained a 'form' of the Oath of Loyalty and Neutrality, the Supreme Court would have nullified the election on the basis of the failure of those who conducted the said election to take the Oath. Because of this statement, the lawmakers intending the taking of the Oath to be mandatory and make its non-compliance to have effect on the validity of an election ensured that a Form of the Oath is provided in the 2006 and 2010 Act

New Evidence shows that INEC constitutionally and fundamentally erred by not carrying out an Oath of Neutrality on its Adhoc Staff that were used during the election. It has been confirmed that the oath which ought to have been sworn before a high court prior to the election was issued after the election

It has also been revealed that neither the Resident Electoral Commissioner, Prof Onukaogu nor the Returning Officer Prof Epoke swore to any Oath as mandatorily required by law. This flaw alone is enough for the election to be cancelled as all the results declared by officers who had not taken this oath is null and void

The constitutional implication of this is that every Form EC8A(1) issued by the Presiding Officers, all Forms EC8Bs issued by Ward Collation officers and all Form EC8Cs issued by the Local Government Collation 'Officers and the Form EC8D issued by the State Collation Officer are null and void. This non-compliance affecting all these officers are extremely substantial and has substantially affected the entire total of 425,254 votes recorded as valid votes in the election. The effect is that the entire votes become a nullity and should therefore be cancelled.

We the people of Anambra State and the PDP demands justice from the state Electoral Tribunal. It is becoming increasingly glaring with each passing day that INEC had indeed bungled the Guber Election in the state. While we await the judgement of the Election Petition tribunal on the 16th,17th and 18th of June,2014 we ask our supporters to be steadfast hoping that Justice will be done to all Anambrarians that left their various works, businesses and private concerns to participate in the State Guber Election of 2013

We also use this opportunity to express our appreciation to President Goodluck Ebele Azikiwe Jonathan for his moral supports and for standing with us through these months of legal frameworks. We also assure the support of Anambra State and indeed members of the Peoples Democratic Party (PDP) to your administration and sincere desire to move tha nation forward