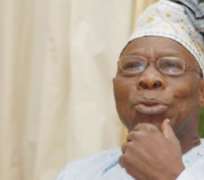 Former President Olusegun Obasanjo had hardly any good word to spare for President Goodluck Joanthan in his assessment of the incumbent's presidency and the handling of abducted girls from Government Secondary School, Chibok in the northeastern state of Borno State.

According to Obasanjo, President Jonathan did not believe until after about 18 days that the kidnap actually took place.

The former present believes that Jonathan's failure to immediately order the rescue of the over 200 schoolgirls seriously affected the chances of rescuing them.

President Jonathan has however severally refuted the point of view that the government acted belatedly in ordering rescue operations for the abducted school girls.

He had explained that the military was already on the ground in the area since the state was in a state of emergency, and that reinforcement was ordered immediately for rescue operations. .

Boko Haram sect had stormed the school on April 14, camouflaging as military operatives who had come to protect the girls, and evacuated them in their vehicles.

The leader of the group later released a video where he threatened to sell the girls.

Obasanjo, in an interview with Bloomberg TV, which was aired on Saturday, said, 'On the kidnapping or abduction, the President did not believe that those girls were abducted for almost 18 days. If the President got the information within 12 hours of the act and he reacted immediately, I believe those girls would have been rescued within 24 hours, maximum, 48 hours.

'Don't forget, they are almost 300 girls. The logistics of moving them is something (delay the sect would have encountered). Unfortunately, the President had doubts; 'Is this true? Is this a ploy by some people who don't want me to be President again, who is doing this?'

'I think that was unfortunate aspect of the whole exercise or situation.'

When asked to comment on the performance of Jonathan, whose candidacy he supported, Obasanjo said Jonathan had performed below the expectations of Nigerians.

'It is not about disappointment; I don't believe he has performed up to the expectations of many Nigerians, not just me,' he stated.

While he disagreed that he 'helped' Jonathan to the presidency, he said it was God who made him president. He, however, said people could be instrumental to one's achievements.

Obasanjo added, 'I always tell the President himself; 'if God doesn't want you to be there, you won't be there.' On instrumentality of people, yes, because God wants him to be there. But having been there, you have to perform. That is what I believe. When you get there, no matter how, just perform and keep on performing.'

Obasanjo is believed to be opposed to President Jonathan's second term bid has been one of the most trenchant critic of the administration and has been associated with the crises that have bedeviled the ruling political parties in recent years.

The five governor's of the ruling Peoples Democratic Party (PDP), who left to join the opposition All progressives Congress (APC) are all his known allies.

The former president confirmed he recently met with some relatives of Boko Haram members,adding that he made a similar reconciliatory effort three years ago but his recommendations were not implemented.

Obasanjo said, 'People have forgotten that three years ago, I went to Maiduguri. That was when Boko Haram attacked the United Nations building in Abuja and they accepted responsibility.

'Then, I went to Abuja to meet security leaders, the Inspector-General of Police and the National Security Adviser to know what is their (Boko Haram's) objectives. Do they have grievances? Can we reach out to them? The feeling I got was that 'they are a bunch of riff-raff; just forget about them.'

'I then went to the President and asked if I could take it upon myself for a fact-finding visit. I want to find out things. The President was gracious and said 'I trust your judgment. You can do that'

'I could not do that without people leading me. There was a lawyer who knew most of them (insurgents) and their leaders. He acted as proxy to talk to them and talk to me. He communicated my arguments, my ideas and my questions to them.

'I reported to the two most important principals - the state governor and President at that time. I believe that if action had been taken at that time, as recommended, maybe we would have gotten to this stage.'

Obasanjo said while he had not been officially mandated to lead the mediation, his next step was to get an approval from the government. He insisted that the President must know about his moves.

He emphasised the need to raise the standards of education in the northern part of the country, especially for female children. He said the relegation of girl-child education in the area was one of the factors responsible for the Chibok girls' abduction.