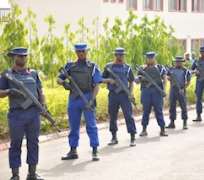 The Nigeria Security and Civil Defence Corps (NSCDC) command in Sokoto has deployed security men in plain-clothes to the border between the state and Niger Republic to prevent arms importation into the country.

The corps Commandant in Sokoto, Aliyu Yemal, told NAN in Sokoto that the command was working with other security agencies to check arms importation and ensure those engaged in such acts were arrested.

Yemal said the command was also working with local government chairmen and community leaders that share border with neighbouring Niger Republic in that regard.

'At the moment, we have deployed plain-clothes operatives to Illela, Sabon-Birni, Isa, Gudu and Tangaza local government areas of the state to arrest those who engage in arms smuggling.

'Some officers have also embarked on foot patrols around the borders.'

The commandant solicited for the support of the people, especially those in rural areas, to cooperate with the officers in efforts to prevent illegal importation of arms for the good of the country.