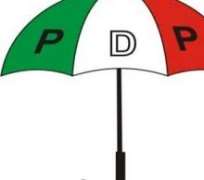 The Peoples Democratic Party (PDP) in Osun has suspended Senator Adetunji Adeleke, a former governor of the state.

Alhaji Gani OlaOluwa, the chairman of the party in Osun, announced the suspension in a statement made available to NAN on Friday in Osogbo.

According to OlaOluwa, 'the decision was taken at the extended Executive Committee Meeting of the party where activities of Sen. Adeleke were x-rayed.'

OlaOluwa said it was embarrassing and 'shameful that Adeleke could engage in anti-party activities when all hands should be on deck in ensuring that the PDP reclaims the state'.

Adeleke had on Thursday in Osogbo announced plans to defect from the PDP to the All Progressives Congress (APC).

The former Osun governor said he would formally declare for the APC at a political rally scheduled for Osogbo.