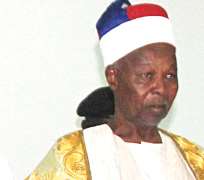 Gunmen on Friday shot dead Emir of Gwoza, Alhaji Idrissa Shehu Timta. in the northeastern state of Borno as he and other Muslim royals were heading to a funeral, the state government said.

The monarch and Emir of Uba, Alhaji Ali Ibn Ismaila Mamza II, were initially attacked at Tashan Alade on the Biu-Garkida road in Biu Council of the state.

The Borno State government, in a statement signed by the Secretary to the state government (SSG), Ambassador Baba Ahmed Jidda, and made available to journalists in Maiduguri, said the late emir was in the company of the Emir of Askira, Alhaji Abdullahi Ibn Muhammadu Askirama and Emir of Uba, Alhaji Ali Ibn Ismaila Mamza, all of whom drove in the same vehicle, as they headed to Biu to pick the Emir of Biu.

They were to all drive in convoy to Gombe ‎State to attend the funeral of the late Emir of Gombe scheduled for yesterday.

'The late Emir of Gwoza had visited his counterpart, the Emir of Uba, ‎Friday and passed the night in Uba, ahead of their planned trip today. The two emirs were this morning joined by the Emir of Askira.

'They drove in the same vehicle with the intention of going to Biu to be joined by their counterpart in Biu.

'Unfortunately, as they were driving in convoy to Biu, they were ambushed by gunmen around Tashan Alade, soon after passing Garkida.

'The gunmen came after the convoy, specifically targeted the vehicle conveying the three emirs and opened fire.

'The Emir of Gwoza was unfortunately killed by the attackers, while the emirs of Askira and Uba escaped unhurt.

'A policeman in the convoy was shot by the attackers, but he survived the attack.

They were travelling to Gombe, the Gombe State capital, to attend the funeral of the late Emir of Gombe, Alhaji Shehu Usman Abubakar, who died on Tuesday.

Garkida is a border town with Adamawa State and 241 kilometres south of Maiduguri, the Borno State capital.

Borno government representative Bab Ahmed Jidda said the attackers are suspected to be members of the Islamist militant group Boko Haram . The country's defense ministry, which also reported the attack, called the gunmen a 'band of terrorists' but did not identify their affiliation.

The emir of Uba, Ali Ibn Ismaila Mamza, and the emir of Askira, Abdullahi Ibn Muhammadu Askirama, escaped unhurt, according to Jidda.

A police escort was shot and injured in the attack, Jidda said.

CNN on its report quotes Wali Ibrahim, a member of the Gwoza royalty and a close aide to the slain emir, said the gunmen opened fire from hilltops overlooking the highway.

'We came under heavy gunfire from the hills, which forced the convoy to break up in disarray,' said Ibrahim, who was in Timta's entourage.

'We returned to a military checkpoint not far from the scene of the attack and reported the incident to soldiers there, but to our surprise they made no effort to go after the attackers,' Ibrahim said.

'By the time we returned to the scene, we met the emir dead inside the vehicle with gunshots,' he said.

Troops were dispatched to the area after the attack and are trying to find the assailants, the defense ministry said.

Boko Haram has repeatedly targeted Nigeria's Islamic emirs, accusing them of selling out by submitting to the authority of the secular government.

The emirs are from traditional royal families and often serve as liaisons between their communities and the secular government. Timta's late father had been a chief in Gwoza.

In July 2012, Nigeria's third-most powerful emir, the shehu of Borno, Umar Garbai El-Kanemi, survived a suicide bombing as he left a mosque near his palace.

The traditional leader survived the attack, but five other people were killed.

In August 2012, a suicide bomber tried to kill the emir of Fika in northeastern Yobe state as he left Friday prayers near his palace in the town of Potiskum.

That emir survived the blast, though his police guard was killed.

Last year, Nigeria's No. 2 Islamic leader, Abo Bayero, the emir of Kano, survived an attack on his convoy. Five people, including three of his bodyguards, died.

There have been calls from activists for Nigeria's emirs to play a greater role in curbing Boko Haram, which has waged a campaign of violence especially in northeastern Nigeria with the aim of imposing a stricter enforcement of Sharia law across Nigeria.

Boko Haram, which means 'western education is a sin,' still is holding more than 200 girls it abducted last month from a school in Chibok, also in Borno state.