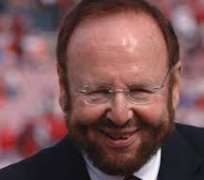 Glazer gained a global profile through his ownership of United, one of the biggest and best supported football clubs in the world.

But he was deeply unpopular with hardcore United fans after loading the club with hundreds of millions of dollars in debt following a 2005 buyout.

His death was announced on the website of the Tampa Bay Buccaneers American football team, one of his other sports franchises.

Under Glazer's stewardship of the Buccaneers, the NFL team enjoyed its first Super Bowl success in 2002.

Glazer's death is not expected to have any bearing on the ownership of the club, with his family retaining a 90 per cent holding in United.

His sons Joel and Avram Glazer continue to serve as co-chairmen of the club. Another son, Bryan, remains on the United board.