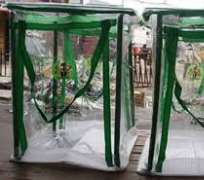 The Indepen­dent Nation­al Electoral Commission (INEC) began the regis­tration of new voters in Enugu State yesterday but the exercise fraught with irregularities and disfunctioning machines, did not go down well with the people of Nsukka, as a group under the aegis of Nsukka Democratic Awareness Forum, has called for the sus­pension of the Resident Electoral Commission­er (REC) in the state, Dr. Lawrence Azubui­ke.

The group, led by its Coordinator and tra­ditional ruler of Opi Kingdom, Eze Williams Ezugwu, made the call yesterday in Enugu dur­ing a press conference, insisting that Azubuike should be investigated over the allegation that he compromised his of­ficial position to deny the people of Enugu North their voting rights.

In the same vein, the state Chairman of the Peoples Democratic Party (PDP), Chief Vita Abba, had last week raised the alarm that 621 of the 2,945 poll­ing booths in the state had disappeared from INEC records, and ac­cused the REC and some politicians in the state of moves to shortchange Nsukka, where the gov­ernorship slot in 2015 had reportedly been zoned.

But Azubuike defend­ed himself and INEC, saying the disappearance of the booths and names from the commission's records occurred when the machine carrying out central automation in Abuja detected some errors in 10 states across the federation, Enugu State inclusive.

This notwithstand­ing, Eze Ezugwu and his people insisted that Azubuike should be suspended pending the completion of investi­gation of the allegation levelled against him, saying if found guilty, he should be dismissed from service and crimi­nal prosecution institut­ed against him.

'We are calling on President Goodluck Jon­athan to order the Chair­man of INEC, Prof. At­tahiru Jega, to direct the Enugu State Electoral Commissioner to con­duct a proper voter's ex­ercise to ensure that the people of Enugu North (Nsukka) Senatorial zone are not disenfran­chised.

'Enugu North (Nsuk­ka) Senatorial zone is one of the largest popu­lated areas in the coun­try. This is added to the fact that the zone has suffered neglect in terms of the number and qual­ity of federal and state appointments in recent years. Mr President, we the Enugu North people are feeling marginalised and the tragedy of the lost voters' register has compounded our woes.'

'Today, every strat­egy to disenfranchise the zone is being applied knowing full well that the zone is currently agi­tating for the governor­ship position in 2015 in Enugu State.

'We also dare to assert that disenfranchising Enugu North is automat­ically putting the next election in danger of los­ing electoral numbers from the zone, knowing full well that the zone has over 50 per cent of the total voting popula­tion in Enugu State,' he said.