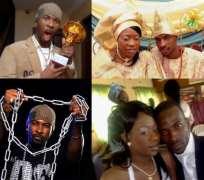 …says my hands are clean

Its been about four months since ethnic singer 9ice dropped his third album 'Tradition'; just a month before he separated from wife, Toni Payne for unresolved disputes. A recent publication on the cause of the break-up is stirring exchange of e-mails and phone calls in the media and music circuit.

Rapper Ruggedman has been named culprit and neither Toni nor Michael (Ruggedman's real name) is taking this any kindly. In a swift reaction, Ruggedman released a statement to the media absolving himself of any complicity in the separation while also condemning publications that have gone to town with the story.

“ I have been hearing rumours that the reason 9ice's marriage broke up was because his wife and I were or are having a secret affair. I laughed when I first heard it”, he wrote. “I could not reach 9ice but got the wife and we laughed over it”.

The story making the rounds is that one of the tracks in 9ice's Tradition is dedicated to telling the singer's betrayal story by very close friend, Ruggedman. The track is titled “Once Bitten, Twice Shy”. The track is allegedly interpreted to imply that 9ice once walked in on his wife giving best friend Ruggedman a blow job.

“It is a shame that some soft sell magazines do not respect their code of journalism to confirm what they hear instead of printing unconfirmed rumours that could be the idea of ill meaning people and thereby further spreading false rumours”, he lambasted.

“I want to tell my loyal fans, fans of 9ice, friends and customers of Tony Payne that I was never and I'm not having any secret affair with 9ice's wife. What ever led to their break up is only known to the couple so until they say something please do not assume for them or spread evil rumours that could affect any of the parties negatively”.

Although 9ice and Toni have kept quiet about their broken relationship, 9ice gets to see son Zion- the only fruit of the 20-month broken marriage, from time to time. Toni who's thrown herself into running her talent management company, Tony Payne Concepts, is reportedly in the process of suing the soft sell magazine that blamed her broken marriage to an extra-marital affair with Ruggedman.

Presently working on his final album and hosting StarQuest 2010, Ruggedman claims to have introduced the separated lovers in 2006 at Gbenga Adeyinka's 10th anniversary in Motherland, Opebi, Lagos, where the couple hit it off.

Now in his thirties, the rapper was until last year an item with model and Tv host, Isio Wanogho in a very publicised romance which later hit the rocks.