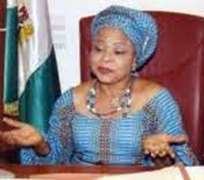 The 3-day conference has the theme: 'Deepening Domestic Utilization of Natural Gas and Routine Flare Elimination.'

She noted that the low utilisation of natural gas in Nigeria was due to the insufficient production and distribution infrastructure, which resulted into flaring of about 1.4 billion cubic feet of gas daily.

She said the legislature and the executive arms of government were working tigether  to eliminate all obstacles in order to attract massive investments into natural gas sector.

'The legislature and the executives have been collaborating to ensure total eradication of the regulatory, operational and commercial problems in order to attract greater investment into the sector.

'In achieving this bold aspirations, this committee is of the view that Nigeria will  require huge investments from local and international communities in human-capital, finance and technological innovation.

'A significant investment of over 30 billion dollars in infrastructure is needed to achieve Nigeria's target of producing 3.4 billion cubic feet of gas daily by 2015, 'she said.

Nwaogu said that objective of the conference was to create appropriate forum for the various stakeholders to find ways to increase domestic use of natural gas and to eradicate gas flaring.

She added that the conference was also aimed at identifying the challenges militating against the widespread consumption of gas in Nigeria.

In an address, the Senate President, Sen. David Mark urged all stakeholders in the oil and gas sector to ensure that Nigeria's gas resources are used for sustainable development of the people.

Mark said that stakeholders in the exploration of the nation's abundant gas resources should focus on creating opportunities that would improve the lives of the people and the various communities.

He noted that the effective exploration of the gas resources would not only engender the massive creation of new job but would also serve as a launch pad for the revival of nation's industrial sector.

He, however, cautioned that the prospects in the sector should extend beyond the exploration of hydrocarbons and the accumulation of wealth for only a select few.

'I need to stress that the gas revolution is not just about hydrocarbons and wealth.

'It is also about human beings and the betterment of the lives of people, their communities and the entire society.

'We have to explore the varying opportunities of this revolution and chart a sustainable way forward for the development of our people.'

Mark also tasked the stakeholders on the need to create effective mechanisms to prevent exploration activities that undermine the social and environmental conditions of the immediate communities.

He called for exploration of other alternative sources of of energy such as wind, solar, and bio- fuel.

Also speaking, the Minister of Petroleum Resources, Mrs Diezani Alison-Madueke, said Nigeria was at a turning point in the history of gas exploration which would yield commendable results soon.

Diezani, who was represented by the Group Managing Director of the NNPC, Mr Andrew Yakubu, said the Ministry had embarked on several strategies to encourage gas production, supply and consumption.

She said the Ministry had continued to spearhead various interventions to stimulate development of infrastructure to ensure gas utilisation for economic growth.

She urged stakeholders to accelerate the infrastructure delivery to explore alternative means of boosting private sector investment in infrastructural delivery and supply development.

Diezani said: 'Our strategy for gas is to leverage the full potential of gas to achieve massive impact on the economy and the Gross Domestic Product (GDP)

'A robust infrastructure is the minimum requirement for supply and market growth.

'We are also reviewing the gas transmission pricing to ensure that it is also commercially adequate to support private investment in infrastructure.'

The Minister also called for acceleration to full market liberalisation to address the urgent challenge of increasing supply to the power sector. (NAN)