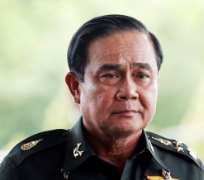 Thailand's military leader has received royal endorsement at a ceremony in the capital, Bangkok, after taking power in a coup last week.

Army chief Gen Prayuth Chan-ocha was formally appointed to run the nation at the army headquarters.

The 86-year-old monarch, King Bhumibol Adulyadej, did not attend the ceremony.

The military seized power in the South East Asian nation last week, saying it planned to return stability to Thailand after months of unrest.

The move followed six months of political deadlock as protesters tried to oust the government of Prime Minister Yingluck Shinawatra. At least 28 people were killed and several hundred injured over the course of the protests.

But the coup - which removed an elected government - has drawn widespread international criticism.

Small anti-coup protests took place in Bangkok over the weekend, despite a military ban on gatherings of more than five people. BBC