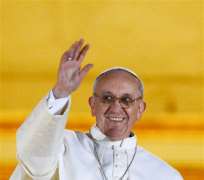 Vicar of Christ on Earth and the leader of the over three billion Catholics World wide is currently on holy pilgrimage to the Holy cities in the middle East- traditional birth place of Jesus.

The above information is not the focus of this piece. The news is what has transpired since the Holy Father Pope Francis touched down in West Bank, the Palestinian controlled territory during which he held high level diplomatic meetings with the political authorities of the Palestinian homeland headed by Mahmood Abbas [ Mr. Abu Muazu].

The Pope after making a remark in support of the two states solution also extended an invitation to the warring parties in Palestine and Israel to visit the Vatican city for peace talk at his instance so as to resolve the lingering issues concerning the statehood of the Palestinians and also for Israel to be allowed to live in harmony with her neighbors.

The internationally respected Cable News Network reports that the Holy Father extended an invitation Sunday [May 25th 2014] to the leaders of Israel and the Palestinian Authority to travel to the Vatican for a "peace initiative," after earlier calling for a two-state solution to the intractable conflict.

The global news medium [CNN] reported that the pontiff's remarks came at the end of an outdoor Mass in Bethlehem's Manger Square on the second day of his three-day trip to the Middle East.

"In this, the birthplace of the Prince of Peace, I wish to invite you, President Mahmoud Abbas, together with Israeli President Shimon Peres, to join me in heartfelt prayer to God for the gift of peace," Francis said.

"I offer my home in the Vatican as a place for this encounter of prayer."

He added, "Building peace is difficult, but living without peace is a constant torment. The men and women of these lands, and of the entire world, all of them, ask us to bring before God their fervent hopes for peace."

The Palestinian side has accepted the invitation and Palestinian Authority President Mahmoud Abbas will go to the Vatican, a Palestinian Legislative Council member, Hanan Ashrawi, told CNN.

The Israeli President's office said that he welcomed the invitation. "President Peres has always supported, and will continue to support, any attempts to progress the cause of peace," his office said.

This latest effort at reaching constructive settlement of the crisis between the two neighbors-a disagreement that has lasted several decades, is perhaps one of the most attractive given that the voluntary chief negotiator and the head of the Catholic Church Worldwide is as objective and independent minded as any qualitative mediator can be.

Since taking office the Pope has brought humility and charisma to bear in the running of the hierarchy of the most powerful religious organizations globally. Hitherto, critics were of the opinion that the administration of the Vatican city prior to the assumption of office of Pope Francis was anything but open and transparent but since he began his papacy, the Argentina-born Pontiff has being remarkably noted for exhibiting some of the choicest attributes of a leader ready and willing to reach out to the unreached and the poorest of the poor.

In all his pontifical Masses, the Pope has spent considerable time to intercede prayerfully for countries that are afflicted by existential conflicts and issues around violent terrorism such as Iraq, Afghanistan, Nigeria and Syria.

Pope Francis has emphasized the need for humanity to truly show love for each other and to build a better World whereby all members of the human race will coexist in mutual harmony. His decision to intervene in the raging crisis of confidence between Palestinians and the Israelis is seen as the best chance for real peace to be attained if the warring parties will be disposed to sheathing their swords.

It is even argued in some circles that since the differences between these two people[Palestinians and Jews] could be found in the Holy Bible since they both have Abrahamic origin it therefore follows that for any lasting solution to be achieved the parties have to resort to some form of theological intervention which I think the Spiritual Head of the Catholic Church has offered to provide in the Vatican City which has elicited widespread interest and joy.

Unlike the United States political establishment or the Arab League which are largely partisan, the office of the Holy Father has no political benefit or indeed diplomatic capital to be attained should the war between these middle East parties be resolved. The Holy Father has global appeal and his activities toward the promotion of peace and harmony among mankind has consistently remained global.

For instance during the last Easter Sunday Mass in the Vatican City Pope Francis dedicated a substantial segment of his sermon to appeal for the end to the violent terrorism in Nigeria which have resulted in the killings of over 12,000 innocent Nigerians. More than 150,000 pilgrims were in attendance from all around the World at that Easter Mass which held in Saint Peter's Basilica during which he made the passionate and moving speech calling for an end to the murderous terrorism/ bombing campaign that specifically targets Christians and moderate Moslems in parts of Nigeria.

The Pope had similarly on many very high profile media functions called for an end to the Syrian uprisings that have led to the killings of several hundreds of thousands of Syrians and have particularly led to the killing of several members of the Christian indigenous ethnic minority people in Syria. Nigeria and Syria are two countries whereby war and terrorism have led to spectacular refugees' crises with Nigeria's internally displaced persons running to three million. With these backgrounds of a man with infinite desire and determination to take the message of peace and reconciliation to all parts of the globe, it is expected that the initiative for peace for the Israelis and their neighbors in the Palestinian territory which will take place under the auspices of the Holy Father will bear fruits that will last.

The Pope has also made a name for himself as a man that is down- to- earth which means that both parties should be prepared to hear the truth and nothing but the truth concerning their seemingly unending crises which centers on the propriety or otherwise of the existence of the two independent states of Palestine and the Jewish homeland of Israel. These two warring parties must accept the spirit behind dialogue which is give -and- take and they must be prepared to make fundamental sacrifices for lasting peace to be achieved.

It is inconceivable for any dreamer to conjure the belief that the state of Israel can ever be destroyed given that the establishment of the Jewish homeland is in substantial compliance with the fundamental human right to a nationality which is inalienable and universal. In the same vein, let no one be deceived into believing that the Palestinians will continue to tolerate the ugly fact that they have no universally recognized statehood. The Palestinians as members of the human race must be accorded all their basic human rights. What is good for the goose is also good for the gander.