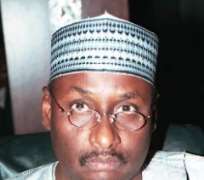 The National Chairman of the ruling Peoples Democratic Party, Alhaji Adamu Mu'azu and some members of the National Working a Committee of the party met with the 37 state chairmen of the party, including the Federal Capital Territory, Abuja on Tuesday and Wednesday on many issues on how to move the party forward.

Top on the agenda of the meeting, according to investigations, was the issue of proliferation of membership cards by some states with the aim of using same for the party's governorship and other primaries.

The party's primaries are selected to start in October, but it was learnt that in order not to leave anything to chance, some desperate politicians have started mobilising and were desperate to acquire the membership cards with which to outsmart their opponents.

Their plan, according to sources at the meeting, was to use the card to get the three statutory delegates from the wards and local government for the expected primaries.

It was also gathered that some members of the party at the national headquarters were selling the cards to the 'highest bidders from states' without the knowledge of the members of the NWC.

A state chairman of the party, who spoke with some journalists in Abuja on Saturday, said the meeting discussed the proliferation of the PDP membership cards smuggled from the national secretariat by various stakeholders and interest groups to enable their participation in the forthcoming wards and local government delegate elections in October to elect the various candidates of the party that would stand for election at the February 2015 general elections.

He said, 'You know that the party has not conducted membership registration across the states for some time now, but underground, illegal registration of members is ongoing.

'We complained to the national chairman of the party, Adamu Muazu that illegal registration has been going on in the states without the authorization of the national secretariat.

'We listed Lagos state, Enugu state, Cross River state, Anambra state and five other states, which have been conducting illegal registration in their states without the consent of the states' secretariat of the party for the purpose of membership drive for the delegate elections and setting up apparel state structures.

'In fact, the Cross River State chairman complained that some governorship aspirants in the state have embarked on illegal membership drive without the consent of the state.'

He, however, said that Mu'azu had ordered the withdrawal of all wards registers in the state to avoid such illegal registration exercise.

It was learnt that after the meeting, the national chairman ordered that investigations must be carried out to determine where those that smuggled the cards out from the national secretariat.

He was also said to have directed the prosecution of anyone found with such cards.

The meeting between the NWC members and the States' Chairmen agreed that there would be a retreated between the NWC and PDP states' chairmen to address some of the challenges affecting the smooth management of the party in their respective states.

Speaking while welcoming the state chairmen, Mu'azu said he was happy that the meeting was holding, which was the first since he assumed office.

He said, 'I called you for this meeting to allow you contribute on how to move the party forward. We must remain stronger because Nigeria is PDP and PDP is Nigeria.

'Though we are facing blackmail by our opponents, we must know that a man without challenge does not with living.

'We must agree that we are going to face a lot of challenges, but we must remain focused, tolerance and steadfast.' Punch