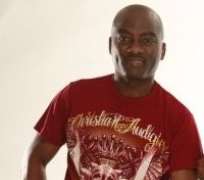 Probably you may not have been informed that there is serious affair going on between the sensational artiste, Suzan Harvey popularly called Goldie and the handsome entertainment impresario, Dayo Adeneye a.k.a. D1 of the Primetime Africa.

Information at our disposal has it that Goldie and D1 have been having a secret affair for a while now without any slightest knowledge of the public.

In fact, Keke, D1's bizness partner, who has been running things together for ages, was shocked to bone marrow when he was hinted of their secret love affair.

D1, we were informed by close sources, decided to keep the amorous affair between him and Goldie secret because of his wife who is said to be very indisposed to nasty acts about her hubby whenever she reads anything in the papers.

Suzan, according to stories going round the city was allegedly said to have been deeply involved in the sexual romance for a while now. Though, there is another allegation of lesbianism leveled on the pretty artiste, Goldie with one Suzan Yusuf who has a unique watering hole off Ajose Adeogun.

They're both alleged to be partners of the unholy act. Their closeness, though, might have been the reason behind the nasty insinuation; however, the fact still remains that the two are too close for comfort.