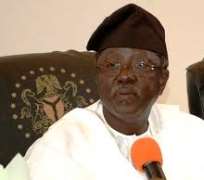 Governor Jonah Jang of Plateau, on Friday, said Nigeria was at war with unknown enemies and urged well meaning people to rise to the country's defence.

Jang made the remark when he visited the scenes of the twin bomb blasts in Jos after cutting short his medical trip abroad.

According the National Emergency Management Agency 118 people died and several others receiving treatments for injuries.

'This is a different type of war from the wars that we all know; these are enemies that are unknown.

The governor was of the view that most of the perpetrators of the heinous crimes were non-Nigerians, employed by the evil people in Nigeria to kill Nigerians.

'These people are being sponsored, they come to a place. They don't stay on trees, but with people.

'We are made to understand that they bring in these bombs not as bombs but they bring them as materials and assemble them in one of our houses.

'Why is it difficult for people to report such cases?' he asked.

The governor said that some of the activities of the terrorists could be checked if Nigerians were more security conscious.

Jang further advised politicians to stop using the emergency situation as the one Nigeria has found itself to gain cheap political advantage.

On the Kidnapped Chibok girls, he said 'We are all sad about the disappearance of these girls and the Federal Government is working seriously with the international community to locate where they are.

'Do they want the President to go to Chibok, to go go the bush to search for the girls himself?'

According to him, some of those in the streets marching against the government are those who had held government positions and could not perform.

Jang told politicians to assist the government by also using their connections to proffer solutions instead of discrediting the President.

'This is our nation, we don't have any other nation to go to, Africa is looking up to us, we are the biggest black population and we are behaving as if we don't know who we are.

He said the state government would clear the busy Terminus Market where the bombs exploded to avoid a repeat of such incident.