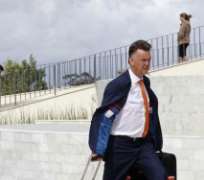 According to the Daily Star , Manchester United has just about wrapped up the signing of Southampton teenage sensation Luke Shaw , but with that rumor having kept us company for a while, that's not nearly the most surprising part of this report.

Apparently, the near-$50 million the Red Devils are set to spend on the 18-year-old is just fifteen percent of the nearly $340 million van Gaal has been given to spend this summer.

For conversion purposes, that's £200 million that he reportedly has to spend - the Star referred to it as a 'war chest.'

Now, it's a given that it's very, very difficult for a newspaper to accurately predict a club's spending habits for an upcoming transfer window, and even if they are right, that's only the amount that's available, not how much they will have actually spent come August.

However, the reports aren't usually entirely off base.  Look at last year, when reports all summer said Arsenal had $170 million to spend, and after keeping quiet for almost the entire window, they did have the funds available to make a $68 million move for Mesut Ozil .  Did the reports accurately pinpoint the correct summer expenditure? No, but they at least knew loads of cash was available.

Move aside, Louis van Gaal is here, and he's brought $360 million with him.

Besides, the fact that such a high number is even being thrown around is completely bonkers. I guess United didn't take too kindly to last year's seventh-place finish.  But you already knew that.

Back to the current task at hand - Shaw is reportedly all but signed on to become Louis van Gaal's first major signing of the summer.

It would make sense that the deal won't be reported for a while, as Shaw is now gearing up to attend his first World Cup as part of England's squad, and likely wouldn't put the bow on the deal until after his time in Brazil is over.

However, the Southampton youngster broke through in a big way last year, and with

In fact, according to another Star report from yesterday, van Gaal is only marking a measly four players on the current squad as completely essential: Wayne Rooney , David de Gea, Juan Mata , and Robin van Persie.  That means even the likes of Danny Welbeck and Michael Carrick , along with the entire remaining defense, have to prove their worth.

A lot of things are going to be changing around Old Trafford, from the staff to the players.  It's the right thing to do, with the poor finish from last year showing just how much the squad has decayed since their last championship two years ago.

Buckle up, because this summer is going to be fast, furious, and fun, and when the season opens in August, expect a whole lot of things to be new about Manchester United.