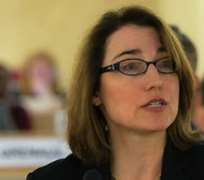 The United States Under Secretary of State for Civilian Security, Democracy and Human Rights, Sarah Sewall, has said that corruption is hindering Nigeria's efforts at ending   insurgency in the North-East.

Sewall, who appeared before a hearing of the House Foreign Affairs Committee on Wednesday, alongside a Pentagon top Africa official, Amanda Dory, added that the military must overcome entrenched corruption and incompetence for it to rescue the over 200 schoolgirls abducted by Boko Haram on April 14.

She said that despite Nigeria's $5.8bn security budget for 2014, 'corruption prevents supplies as basic as bullets and transport vehicles from reaching the front lines of the struggle against Boko Haram.'

Sewall, according to the New York Times, also told the committee that morale was low and that desertions were common among soldiers in the 7th Army Division fighting the insurgents.

She sidestepped a question from one lawmaker asking for an update on the abducted girls' location and welfare, saying, 'Given time, I am hopeful that we will make progress.'

Sewall had on May 13 clarified the level of involvement of US personnel in the rescue of the abducted girls, saying it   would not be combative.

She told select journalists   in Abuja that it was up to Nigeria to accept or reject the prisoners exchange offer made by   Boko Haram leader, Abubakar Shekau.

In her testimony, Dory said that Pentagon believed that the girls might have been dispersed into multiple smaller groups.

'They may or may not all be in Nigeria,' she added, stressing that Nigerian military's heavy-handed tactics with Boko Haram risked 'further harming and alienating local populations.'

Members of the   Committee had disclosed that   Boko Haram insurgents were trained by al-Qaeda.

The Chairman of the Committee, Ed Royce, said being trained by the global terrorist sect meant greater terror for Nigerians, and greater challenges for the security forces.

The committee's hearing on the menace of insurgents was tagged: 'Boko Haram â€' The Growing Threat To Schoolgirls, Nigeria And Beyond.'

The US   had earlier said that Boko Haram was not a branch of the global terrorist organisation, al Qaeda and it should be treated as 'its own terrorist group.'

President Goodluck Jonathan had during a security summit hosted by French President Francois Hollande in Paris on Saturday described the Boko Haram, as the 'al Qaeda of West Africa.'

Washington had on Wednesday said that 80 US   troops were currently in Chad   to support the growing international effort to   rescue the abducted schoolgirls.

'These personnel will support the operation of intelligence, surveillance and reconnaissance aircraft for missions over northern Nigeria and the surrounding area,' the White House said in a statement formally notifying the US Congress about the deployment.

The   Human Rights Watch had after the allegation by Sewall advised the Federal Government to consider investigating the source of funding for Boko Haram.

The body, at a news conference by its European Media Director, Mr. Andrew Stroehlein, in Lagos, said this would go a long way in winning the war against   insurgents.

Recalling that the US had hinted of the possibility of Boko Haram getting its funding from al- Queda, it stated that   the coming together of the world powers to confront Boko Haram should have happened earlier than now.

The HRW's Nigerian Researcher, Mrs. Mausi Segun,   also advised the Federal Government to demilitarise   security around   schools in the North.

Segun warned that   positioning military and police forces around schools would be a counterproductive response to terrorist attacks.

She argued that the tendency was high that their presence   around schools would attract insurgents.

Segun said rather than being positioned directly near schools, the security forces should   be at places where rapid response could be made when attacks are launched.

Another approach, according to her, is   formulation of an early warning system that would allow for quick evacuation of students from schools marked for attacks.

Meanwhile, members of the House of Representatives rose in unison on Thursday to condemn terrorism and that Nigerians should see terrorists as 'our common enemies.'

The lawmakers said terrorists were out to destroy all the cherished values of the country, including respect for human lives and property.

At a meeting in Abuja coordinated by the Chairman, House Committee on Human Rights, Beni Lar, the lawmakers urged support for soldiers fighting to stop insurgents.

Lar said, 'As lawmakers, we came together to condemn terrorism and to see terrorists as enemies of Nigeria.

Terrorists want to take away our democratic values and all the things we love to do as a country. As a parliament, we have passed so many bills to protect the rights of Nigerians and to build a free society.

'Terrorists want to destroy all of this and we must condemn them.'

Lar also said the meeting strongly condemned the abduction   of   girls in Chibok.

'The key message here is release our girls now', she added.