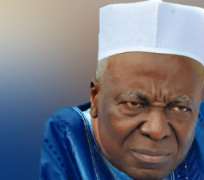 The Federal Government has added additional 28 days to the life span of the ongoing National Conference.


According to the Conference Chairman retired Justice Idris Kutigi who announced the extension today in Abuja at the Conference plenary said that the leadership of the conference had requested for six weeks extension but an approval of four weeks was granted.

'After our sitting yesterday (Wednesday), we visited the Secretary to the Government of Federation and we were informed that the government only granted us four weeks extension. We have asked for six but we were given only four weeks.

'In that regard we have to get our programmes tight up because I think the conference will now end on July 31.

'Due to the time factor, the conference management feels we should request from the delegates whether you are prepared to put in extra sitting hours on Fridays and Saturdays?

'I know you did a lot during the committee stage, now is the final stage we also need the same sacrifices from you. We are requesting for additional sittings on Fridays and Saturdays,' he said.