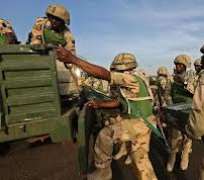 The Nigerian Army has cried out that its inability to effectively fight insurgency in the country is largely due to inadequate funding.

He said, 'Currently, budgetary allocation for the military is inadequate to meet the contemporary security challenges and also cater for the welfare of the Nigerian Army.

'The Nigerian Army is enmeshed in the bureaucratic bottlenecks for the funding approvals for military operations. This calls for a review as the increasing speed at which the effects of conflict appear in the operational environment will continue to challenge commanders.

'It is our humble appeal that government should evolve other means of funding and supporting military operations than the normal budgetary allocation. Such means include but not limited to strategic cooperation and liaison with other civil industries for the production of uniforms and other equipment', he said.

Speaking in a chat with newsmen, General Muraina stressed further that, 'We are not oblivious of the constraints on revenue generation and the fact that government has so many other responsibilities, but we are appealing to the government to review the current template of funding of the military, considering the current security challenges.