THE OBSCENITY THAT IS BOKO HARAM 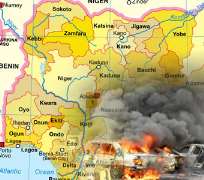 When, in the late fifties and early sixties, a globally- acknowledged and celebrated literary icon; Professor Chinua Achebe, lamented that 'things had fallen apart and were no longer at ease' not a few failed to comprehend his lamentation from a futuristic devolution.

Could readers of Chinua Achebe's 'Things Fall Apart' and 'No Longer at Ease' ever have imagined that the Nigerian society could snow-ball into a state in which manifestation of man's inhumanity to man could rather become the norm instead of exception?

Who in Nigeria then would ever have thought that a gang of human-beings, acting strictly on Islamist fundamentalism and drunkenness, could deliberately cause the explosion of improvised explosive devices in a Catholic Church in Madella in Niger State that would lead to the death and maiming of hundreds of Christian worshippers on a Sunday? As at the time Achebe drew the attention of the World Community that things had so fallen apart that the centre could no more hold, did any person from the global community anticipate that innocent defenseless harmless Nigerian female students who were sitting for their Senior Secondary School Certificate Examination in not, hitherto publicized, Chibok in Borno State in the North East of Nigeria would be rounded up by Abubarkar Shekau's Boko Haram and hauled to desolate Sambisa Forest?

As Professor Wole Soyinka rightly put it, Abubarkar Shekau; the self- acclaimed leader of Boko Haram, is enmeshed in decrepit obscenity. He and his gang of followers are either religiously infatuated or are irretrievable victims of extremity of drug addiction or even both.

Be it as it may, the reality on ground is that Boko Haram has declared a war for which its geographical boundaries are not very easily defined or can even be taken for granted against the Federal Government of Nigeria.

The constitution of the Federal Republic of Nigeria of 1999, as amended, makes the country secular and not religious or sectarian. There is, therefore, the expectation that Nigerian citizens have the fundamental right of freedom of worship. On what basis is the sectarian Boko Haram insisting on the islamization of the Nigerian government and her people? Here surely lies the obscenity!

The worst thing that can happen to an entity is not to acknowledge when a war has been declared against it and to appreciate the gravity of such war. Boko Haram, which may be receiving substantial support from such out-lawed organizations like Osama bin laden's Al-Quaeda, has never hidden its effrontery against the Nigerian State. Thank God, President Goodluck Jonathan, as commander-in-chief of the Armed Forces of the Federal Republic of Nigeria, is appreciative of the enormity of the war at hand.

This is a time when Nigerians from all walks of life and different shades of opinion should come together and work in unison in order to save our dear country. A time such as this cannot be favourable to unguarded utterances emanating from partisan political differences.

The fact of the matter is that a shot has been fired into the Nigeria's compound and patriotism demands that every worthy citizen of this great country; the pride of Africa and the Black World, should stand up vigorously in arms in defence of our heritage.

As has been suggested by many, Nigeria's security agencies should devote more time to intelligence gathering and counter-intelligence. No piece of intelligence should be ignored. In a war, every piece of information should be thoroughly investigated and appropriately analyzed before it could be said to be worthless.

Indigenes of the local communities in the three North Eastern States of Adamawa, Borno and Yobe where insurgency is most pronounced in the North of Nigeria, should know that what is principally at stake is their future. They should, therefore, be sincere to themselves by giving maximum co-operation to security agents operating in their zone. A situation where a local would deliberately give information to security operatives that could even lead to soldiers being ambushed and killed would affect the morale of security operatives very negatively and would end up compounding the security challenges in the affected areas.

As for the now internationalized Sambesi Forest; a former game reserve which was renowned for its wild life but has now been converted to being the stronghold of terrorists, Nigerian security agents should do everything within their competence to dislodge the insurgents and repossesses the vast area.

On the issue of the more than two hundred girls abducted from Government Girl's Secondary School, Chibok, the global community that has already condemned this absurdity should not, under any guise, be demoralized from bringing her diverse experience in rescue operations to assist in rescuing these innocent Nigeria's future hopes. The issue of exchanging these children who have never committed any atrocity against the Nigerian State for insurgents who have caused terror, destruction and countless deaths should not, under normal circumstances be imagined, much more entertained. But in our present situation, the Federal Government may have to bend the rules. Any thing we can do to secure the release of these innocent girls, who must be undergoing the worst psychological, spiritual and physical trauma of their life, must have to be done.

Nigerian politicians should learn a lesson from the present holocaust that is Boko Haram. Before the 2011 Presidential election, a particular presidential candidate of a political party had threatened that the country would be made ungovernable should he fail in that election. As it is often said in African tradition, the witch has cried and the child has died?

It is equally important to observe that in prosecuting a war, the policy of taciturnity should rather prevail instead of verbosity. Security strategies are best felt through action than being openly advertised. The enemy should constantly be left in the dark. It does appear that a lot of comments on strategies geared towards rescuing our Chibok Girls are randomly and unprotectedly being discussed in the public domain. This may strengthen the enemy.

Nigeria's neighbours of Benin, Cameroon, Chad and Niger should appreciate the obvious fact that insecurity in Nigeria certainly is insecurity in their countries. They should, therefore, give maximum co-operation to Nigeria in her fight against terrorism.

With regards to the Nigerian security agents, this time calls for absolute confidence in them. The most terrible thing that would happen in this war against insurgency is for secret information passed to security operatives by civilians to get to the Boko Haram. This would be suicidal.

Finally, Nigerians should be conscious of the fact that a time comes in the life of a people when their faith in God could be put to test. This is one of such times. If the Israelites could walk out of Egypt into freedom in the land of Cannan, with faith in God Almighty and constant prayers, Nigerian would surely triumph over this sadistic intrusion of satanic terrorism.