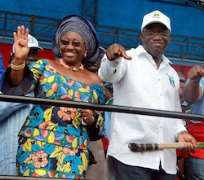 Leaders of All Progressives Congress (APC) across the nation on Wednesday converged on Ado-Ekiti, the Ekiti State capital, to drum up support for the second term aspiration of Governor Kayode Fayemi.

Some of those who spoke described Fayemi as a `deliberate choice' of the party and appealed to the electorate to cast their votes for him.

A minute silence was held at the rally for victims of Tuesday's bomb blast in Jos.