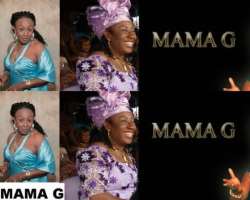 Several hundreds of friends and well wishers are said to have bought the Ankara attire (Aso Ebi), for the wedding of Chioma ozokwor the daughter of popular actress, Patience Ozokwor, which will be held next weekend.

Though the Aso Ebi and headgear go for N16, 000, nollywoodgists.com gathered that there has been a mad rush for ithem, to the extent that those in charge have ordered for fresh supplies from the textile company.

Colleagues of Mama G, as Patience Ozokwor is fondly called, are said to have bought the Aso Ebi in groups, while other friends and fans of the actress have equally caught the bug.

nollywoodgists.com gathered that the traditional marriage will take place on Friday next week at the late Engineer Edmond Ozokwor's compound in Enugu State, while the church wedding and reception will be held the next day at the Domino City Church, off Emene Road and Blue Island Hotel, Enugu respectively.

Speaking with nollywoodgists.com on phone recently, the highly elated Mama G said she can't wait to witness the event, which she further described as one of the best things to have happened in her life.

“Of course, I'm very happy. The joy of every mother is to witness a day like that and I can't wait to witness it. I thank God for taking me this far because it is not by my power,she stated.