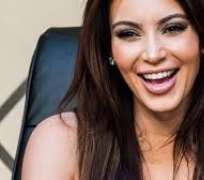 Kim Kardashian is in the best shape of her life http://www.huffingtonpost.com/2014/05/13/kim-kardashian-abs_n_5317049.html , which is hardly a surprise since her wedding to Kanye West is mere days away.

On Monday, May 19, the 33-year-old bride-to-be proved just how wedding-ready she really is - nearly causing whiplash in a barely-there pink tank top, and pencil skirt http://www.dailymail.co.uk/tvshowbiz/article-2632786/Kim-Kardashian-flashes-cheeky-hint-sideboob-going-braless-pink-vest-Kanye-West-step-Paris.html - as she strolled down Avenue Montaigne in Paris with West.

The couple are set to marry on May 24, though the location of where they will wed still, somehow, remains unclear. For months it was believed that the #worldsmosttalkedaboutcouple would marry in Paris, but last week a spokeswoman at the Florence mayor's office told the Associated Press that Kardashian and West would wed at Florence's imposing 16th-century Belvedere Fort. And just when we thought rumors surrounding the wedding's location were finally over, TMZ reports that the couple will actually be saying 'I do' at the Palace of Versailles http://www.huffingtonpost.com/2014/05/16/kanye-west-florence-wedding_n_5337712.html outside Paris. http://www.tmz.com/2014/05/16/kim-kardashian-kanye-west-wedding-pallace-versailles-paris-france/

This is a report that directly contradicts a spokesperson for the Palace itself http://www.huffingtonpost.com/2014/01/21/kim-kardashian-kanye-west-palace-of-versailles_n_4639795.html , who tweeted back in January, 'On 19th January @KimKardashian and @kanyewest visited the Palace of Versailles but they are not planning their wedding at the Palace.'

Where in the world are Kimye getting married? We don't know, but with five days to go, soon the world will find out. Huffpost