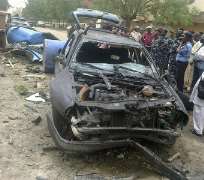 Commissioner of Police Aderenle Shinaba told reporters that a vehicle carrying two gas cylinders, a jerry can of fuel and wires were found abandoned.

He said the primed vehicle might have been abandoned by terrorists for one reason or another.

The police have confirmed that five people died in the attack; seven were injured. Four of those injured have been discharged from the hospital.

Police spokesman Magaji Majiya, an Assistant Superintendent of Police (ASP), said the area had been swept and bodies removed to a morgue.

Residents said nine people died in the explosion.
Shinaba told  reporters at the scene of the incident that five people died and seven others were injured.

As he spoke, a resident, simply identified as Mr. Harry, interjected: 'Sir, you're supposed to hear from us who were at the scene of the incident. I beg your pardon; it was not five people that died; we counted nine dead people, after the whole thing had subsided.'

Six vehicles were destroyed in the explosion. A three-storey building was badly damaged.

An eyewitness said the attack could have been more devastating if the terrorists had hit their target â€' a packed hotel.

The hotel was being inaugurated when the suicide bombers arrived at the place in a Toyota  Sienna bus, which was already primed with a bomb.

Security men immediately ordered the driver to move his car away from the front of the hotel. The parking lot had been occupied by other vehicles and  there was no space for him.

The man reversed the car and parked in the middle of the road. He alighted from the car and disappeared .

The source said minutes after,  there was a deafening sound, followed by pandemonium as people started running for dear lives.

The Eze Ndi-Igbo, Igwe Boniface Ibekwe, urged security agents to do more, so that Sabon Gari residents could be more secured.

'I was so sad and shocked when I heard this unfortunate bomb blast in my area.  The people of Sabon Gari  appreciate the efforts  of the security agents and we shall continue to cooperate with you people in order to make Sabon-Gari a safe place,' Ibekwe said.