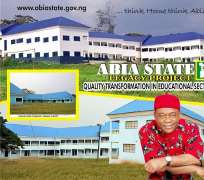 It was John Quincy Adams who posited that 'to furnish the means of acquiring knowledge is the greatest benefit that can be conferred upon mankind. According to him, education prolongs life and enlarges the sphere of existence'. This, without a doubt, is the framework on which the present Abia government under the leadership of Chief TA Orji (Ochendo Global) hinges its philosophy of providing quality and quantitative education to its citizenry.

Historically, the policy to make Abia an educationally advanced state started in 2007 when Ochendo assumed office as the governor of Abia state. His assumption of power saw to the rebuilding of many dilapidated schools and equipping of both the primary and post primary institutions in the state with science and laboratory equipments including arts and crafts.

As a man who benefited largely from education, having acquired university education at a time many of his contemporaries were involved in farming and trading, Ochendo made it a policy to turn things around and put education on the front burner. First, he started by not only offering public servants particularly teachers one grade level ahead of what their salaries were in 2007 when he assumed office as the third executive governor of Abia state but ensured the promotion and recruitment of teachers and non-teaching staff into the state school system were given priority.

The second remarkable strategy was the administration's policy of returning some schools to their original owners. Many schools which hitherto were managed by the state government and originally owned by the missionaries, groups and individuals were returned to them to encourage better management and competitiveness in the education industry. However, teachers in the affected schools were given the option of joining government-run schools or remain in the returned schools, with the guarantee of their salaries.

This intervention resulted into a boom in the development matrix of public schools, the aftermath of which was the spiral increase in the enrolment index of public schools. In addition, the government also carried out some reforms such as the total renovation of schools as well as proper placing of teachers in their areas of specialization. Today, Abia education system is gradually returning to the pre-civil war era when the educated stoutly defended their certificates.

Interestingly, this intervention in the education sector since 2007 by the T.A Orji's administration has given birth to some harvest of academic excellence and eggheads that come tops in examinations around the world. First class universities and other institutions of higher learning in the world are now harvesting Abia's bequest in education. Joseph Addison, the English essayist once said 'education is a companion which no misfortune can depress, no crime can destroy, no enemy can alienate, no despotism can enslave.'

The wisdom of the state government to implant a solid structure in the sector has produced high flying eggheads like Emmanuel Ohuabunwa of the Johns Hopkins University, in United States. It will be recalled that Ohuabunwa at 22, made history in the university by becoming the best graduating student in the history of the institution.

His striking performance sent most leading newspapers in the United States screaming with captivating headlines about the feat of this young Nigerian from Abia State. That Ohuabunwa's name in the academic calendar of the world is conspicuous is courtesy of the robust academic foundation put in place back home in Abia.

As the United States was celebrating Emmanuel Ohuabunwa couple of years back, four other Nigerians, three of them from Abia state also broke the world's record in scholarship at the Dillard University United States. The Nigerians: Messer Emole Anya Dimgba, Victor Ogburie and Stephen Ogidi Igwe; all Abians as well as Merrilyn Akpapuna from Delta state made excellent results in their academics,; prompting the American first lady, Michelle Obama to describe them as 'the next generation of geniuses'.

It should be noted that these young Nigerians came tops amongst over 226 graduates of the historically black college. Like Ochendo usually admonishes the youths of Abia, Michelle Obama told them at the graduating ceremony that 'you have no excuses to stand on the sidelines. Education is still the key to real and lasting freedom. It's up to you to cultivate that hunger for education in those coming after us'.

At a time the world is devastated over callous abduction of over 200 Nigerian girls by the Boko Haram sect, these young Abia indigenes have certainly made the international community which is outraged by the sect's cruelty against women and children to take another positive view on Nigeria. In consonance with the declaration of Henry Peter Brougham, the British law reformer, 'education makes a people easy to lead, but difficult to drive; easy to govern, but impossible to enslave', Gov Orji ensured that schools in the state including the state university and other institutions of higher learning in the state are places of light, liberty and of learning.

This is certainly the foundation that is being laid at home by the Chief T.A Orji's administration. His government fosters and moulds an academic system that is based on self recognition, self reliance, self renaissance and self engagement. Like Umberto Eco, the Italian novelist and semiotician once said, 'learning does not consist only of knowing what we must or we can do, but also of knowing what we could do and perhaps should not do'

Abia school system not only builds in the child the virtuous of hard work but self reliance. No wonder the state skill acquisition centre and various youth empowerment programmes emphasize on both theoretical and practical form of education with emphasis on artisanship and trading. Students and artisans alike are drilled to know all that there is to be known in their areas of study.

Interestingly, Abia's government position in using quality education to forestall crime and criminalities and also to create jobs has been acknowledged widely. The American first Lady, speaking at the event of the graduation of the Dillard University graduates informed her audience that the statistics about high rate of unemployment and poverty in the black community and developing world are due to lack of jobs. She therefore encouraged the young graduates to start small, by perhaps volunteering to teach others and rally round their communities to start a mentor programme.

It is now up to other students, parents and teachers to assist in sustaining this lofty goal in education bearing in mind that freedom and justice do not come from education without which freedom nor justice can be permanently maintained. Teachers should bear in mind the words of Albert Einstein, the German mathematical physicist that, 'it is the supreme art of the teacher to awaken joy in creative expression and knowledge'.