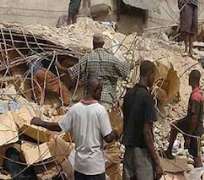 No fewer than 20 persons were injured on Monday when an uncompleted church building collapsed during downpour in Agudama-Epie, near Yenagoa.

An eyewitness, Tonye Beregha, told journalists in Yenagoa that the building belonged to the National Apostolic Church of Nigeria.

'We heard a loud sound which we thought was that of thunder. But it was the uncompleted building that collapsed, trapping many people under the rubbles,' he said.

He said the downpour also destroyed roofs of many buildings in the state capital as well as felled some street lights on Sani Abacha expressway, causing heavy traffic gridlock in the area.

The building, which collapsed at about 10:30 a.m., caused pandemonium as most of the victims had only taken refuge from the rain.

The Deputy Governor of the State, John Jonah, the Commissioner of Police, Hillary Okpara and a rescue team from Julius Berger, visited the scene.

However, before their arrival, sympathisers had rescued the trapped victims.

The State Commissioner for Works, Lawrence Ewhrudjakpo, said the state government would reprimand the founder of the church over the incident.

He attributed poor supervision of buildings in the state to shortage of manpower in the Capital City Development Authority (CCDA).

Ewhrudjakpo said Governor Seriake Dickson had approved the recruitment of more than 100 persons by CCDA.