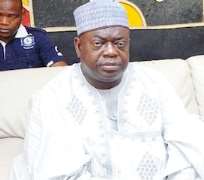 The Northern States Governors Forum on Monday called on security agencies working to contain the activities of the dreaded Boko Haram sect to scale up surveillance in the north.

Chairman of the forum and Governor Babangida Aliyu of Niger, who made the call in Minna, added that 'security agencies must re-strategise their operations to end the senseless killing of innocent citizens.'

Aliyu was reacting to Sunday's explosion which killed several persons in Sabon Gari in Kano city.

The governor's call was contained in a statement by the coordinating Chairman of the Forum of Northern SSGs and Secretary to the Government of Niger State, Alhaji Saidu Kpaki.

Aliyu appealed to terrorists to give peace a chance, saying that visiting violence on Kano after months of respite was a big blow to efforts toward peace.

He urged the perpetrators of the violence to lay down their arms while cautioning security agencies against complacency.

Aliyu commiserated with the families of those killed or injured during the blast and called on all security agencies to double their efforts in the discharge of their responsibilities.