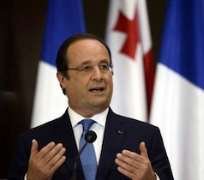 “We have already told our Chinese friends that we were at their disposal in helping them find their citizens,” Laurent Fabius said on a visit to the Chinese capital, where he will meet Prime Minister Li Keqiang on Monday.

The Chinese road workers were apparently taken from their camp in a night-time attack in northern Cameroon on Friday night. They were likely taken back across the border into Nigeria, a police source said Sunday.

Fabius noted the attack took place as French President Francois Hollande convened heads of state to decide how to curb the havoc Boko Haram terrorists have wreaked in their base of Nigeria and in neighbouring countries.

Nigerian President Goodluck Jonathan and his counterparts from Benin, Chad, Cameroon and Niger approved an action plan on Saturday to combat the Islamist group blamed for 2,000 deaths this year as well as last month's abduction of more than 200 schoolgirls from northeastern Nigeria.

The agreement involves the coordination of surveillance efforts aimed at finding the schoolgirls, and the sharing of intelligence and joint efforts to secure the porous borders in the region.

In the longer term, the countries agreed to forge a regional counter-terrorism strategy under the auspices of the existing but barely active Lake Chad Basin Commission, with technical expertise and training support from Britain, France, the European Union and the United States.