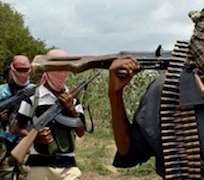 The 10 Chinese workers abducted by Boko Haram gunmen in Cameroon have most likely been taken back across the border to the Nigerian Islamist group's strongholds, a police official said Sunday.

“We are almost certain that the 10 Chinese have been kidnapped and transferred to Nigeria. We have no fresh news about them,” the official told AFP on condition of anonymity.

“The search continues (in Cameroon) but apart from small pieces of information I can't see what could come out of it since the attackers have left the country,” he said.

He added that the all the helicopters that might have been used to survey the border area and help with the search were in the capital Yaounde ahead of the 20 May National Day military parade.

The celebrations were also the reason the unit of elite Cameroonian troops that usually guards the group of Chinese workers attacked late Friday was not up to its usual strength.

According to the local officials, a large group of heavily armed Boko Haram fighters in five vehicles stormed the Chinese encampment and engaged the Cameroonian soldiers.

The brazen attack came as the president of Nigeria and counterparts from neighbouring states met in Paris to “declare war” on Boko Haram.

The meeting was convened a month after the kidnapping of more than 200 schoolgirls by the Islamist group in northern Nigeria sparked international outrage.