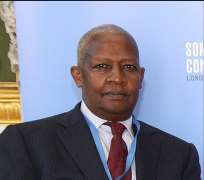 “It would be disturbing to see the foreign minister of a country that passed an unjust, harsh and discriminatory law based on sexual orientation preside over the UN General Assembly," Senator Gillibrand (D-N.Y), said of the bid by Sam Kutesa for the prestigious United Nations post.

"The United Nations' mission should remain focused on bringing the world community together rather than embracing divisiveness and intolerance. I urge the UN to raise Uganda's human rights violations with Mr. Kutesa and stand with Uganda's LGBT community facing injustice and persecution at home,” Gillibrand added, in a statement to The Black Star News.

Gillibrand is a rising star in the Democratic party political establishment and there is much speculation that she is a future presidential contender. She is on the Senate Armed Services Committee, and the Aging Committee.

Senator Gillibrand's statement comes a day after one by Senator Charles Schumer (D-N.Y.) who said Uganda's anti-Gay law, which was signed Feb. 14, 2014 by President Yoweri Museveni "is in contradiction to the UN charter and denies equality for members of the LGBT community."

Schumer also said the law was contrary to the United Nations charter which "clearly promotes respect for human rights and for fundamental freedoms for all without distinction as to race, sex, language, or religion." He said: "That's why the UN should review Mr. Kutesa's participation in, and views on, such legislation."

When asked about Senator Schumer's statement, a spokesperson at the State Department said, "Secretary of State Kerry has been very clear about his position on Uganda's discriminatory Anti-Homosexuality legislation," and also that "... the Secretary conveyed the United States' opposition to the legislative action publicly as well as directly to Uganda's leaders."

The spokesperson did not respond when asked about Secretary Kerry's position regarding Kutesa's bid for the UN post.

The election is scheduled for June 17, 2014.
Kutesa would serve for a one year term, and would preside over the General Assembly in September when world leaders of the 193 member countries attend, including President Obama.

At the time he signed the anti-Gay law Gen. Museveni, who has been in power for 28 years, referred to them as "disgusting" in an interview with CNN.

The Black Star News in a series of editorials has called on Secretary of State John Kerry to revoke Mr. Kutesa's visa to prevent him from becoming President of the General Assembly and explained why he's unsuited for the high profile post.

The Black Star News's editorial comments are linked to an online petition drive which has now garnered 556 signatures as of today, opposing Mr. Kutesa's candidacy.

The editorials cite Uganda's numerous invasions of neighboring countries -- Rwanda, the Democratic Republic of Congo, South Sudan-- in violation of the United Nation's cardinal principles of: respect for national sovereignty; national territorial integrity; and non aggression against other nation states.

The Wall Street Journal on June 8, 2006 had reported that previously Gen. Museveni had asked then UN Secretary General Kofi Annan to block the International Criminal Court (ICC) of the alleged crimes committed in Congo by Uganda, after the International Court of Justice had found Uganda liable and awarded Congo $6 to $10 billion in reparations.

Estimates of Congolese who have perished as a result of the invasions and attendant wars exceed 7 million and going as far as 10 million.

The editorials pointed to Kutesa on March 4, 1999, having been censured by Uganda's Parliament after a debate on the floor for corruption, by a 152- 94 vote. The editorial had also linked to transcripts of the debate in Parliament; the transcripts were suddenly removed yesterday reportedly by the authorities.

The Black Star News has a copy of the transcripts.
Mr. Kutesa was also implicated in a corruption scandal involving the disappearance of a reported $150 million in public funds when Uganda hosted the Commonwealth Heads of Government Meeting in 2007.

In 2009, Kutesa was mentioned in a memo to the State Department by then U.S. ambassador to Uganda Jerry Lanier, as one of three powerful ministers who Gen. Museveni was unwilling to hold accountable on corruption allegations.

In 2011, Kutesa was also one of three ministers accused in Uganda's Parliament of accepting millions of dollars in bribes from a foreign oil company seeking favorable terms as Uganda gets ready to start producing oil.

The U.S. is a major supporter of the Ugandan regime.