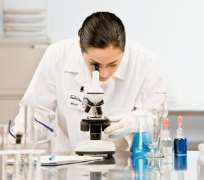 A widespread blood cancer has been knocked into remission with a single shot of a measles vaccine. Mayo Clinic researchers have revealed the results of a breakthrough test.

The success of the ground breaking test offers new hope to patients suffering from cancer. The new cancer study was published online in Mayo Clinic Proceedings. According to the Star Tribune, the new discovery has provided 'proof of concept' that one massive dose of live and infectious measles can cure cancer.

Stacy Erholtz, a woman who has blood cancer, has been cured thanks to the researchers who injected her with the measles virus. The measles was enough to overpower the cancer cells, according to the study. The 50-year-old woman from Minnesota, U.S. was given another chance at life. She was one of two test subjects in the cancer research.

Lead researcher Dr Stephen Russell said the successful test was a promising start to pave the way for clinical trials. He said it was a landmark test. Scientists have known for a long time that a virus injection can destroy metastatic cancer in mice. However, this was the first time that the concept was tested on a person and worked.

Dr Russell explained that the measles will bind with cancer cells to replicate. In the process, the virus attacks the cancer cells and the human body's immune system destroys what's left. The groundbreaking test had given doctors a benchmark for the appropriate does needed to reduce cancer in patients. About 100 billion infectious units are needed to destroy cancer cells instead of 10,000 units.

The Journal of Laboratory and Clinical Medicine reported that cancer therapy using live replicating viruses has been expanding in the past decade. In the 1970s, doctors who treated children with cancer observed the cancer regressed when the children came down with measles.

The discovery had become a subject of interest for doctors who began to consider measles as part of cancer therapy.

Researchers at the Mayo Clinic said they still have to overcome many challenges including the human body's defenses. They said once the body's immune system has experienced battling a virus, doing it for the second time would no longer be effective. The body will just attack the virus before the virus can take over cancer cells.