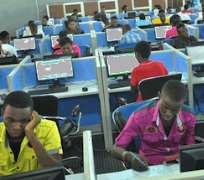 NAN reports that the centre commenced biometrics screening from 7:00 a.m. to 8:30am taking less than one minute to screen each candidate.

The examination lasted for three and half hours.
Candidates were logged out automatically by the system at the expiration of their time and the examination was concluded at about 12:30 p.m.

A staff of JAMB, Ajetunmobi Olalekan, told NAN that 197 candidates sat for the examination at the centre.

According to him, the centre will accommodate 5,000 candidates for the two weeks that it is scheduled to conduct the exams,” he said.

Olalekan said that facilities at the college for the conduct of the CBT examination had been improved compared to previous year.

“There were hitches at this centre, such as power supply and system failure in the previous year but it has been addressed.

“The centre is on standby generator and there is back up for the systems.”

A candidate, Michael Adeniji, said that he experienced system failure as his computer was logging off but that it was fixed immediately.

Another candidate, Ramota Muritala, said the examination was smooth and successful as the system functioned accurately.