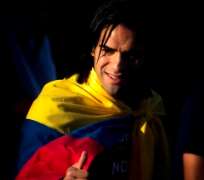 Madrid – Colombia striker Radamel Falcao has said he will not be on top form at the World Cup finals starting next month even if he recovers sufficiently from January's knee operation to participate.

The South American nation's big hope on their return to soccer's global showpiece after a 16-year absence, Falcao has been named in coach Jose Pekerman's provisional squad but it is still not clear whether he will be able to play.

“That is the question, of course,” Falcao told Spanish sports daily Marca when asked about his chances of featuring at the tournament in Brazil.

“And in the next few weeks a decision will be taken according to my situation,” added the Monaco forward, who will be 32 when the next World Cup finals are played in 2018.

“I have been fighting for months and working well. The knee has developed without suffering any relapse but everything will be evaluated at the right time.

“In a football sense, it will be impossible to get there at 100 percent because I am lacking competitive playing time.

“To sum up, if I have a good feeling I will go. If I see that I am not sure and I won't be able to contribute I will be prudent and I won't go.”

Colombia have been drawn in Group C with Greece, Ivory Coast and Japan.