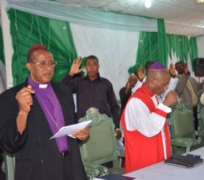 It was a solemn atmosphere at Micheal Okpara Auditorium, Umuahia, as scores of people, prayer intercessors and clergies from different denomination in Abia State gathered to seek God's divine intervention for the release of the still missing Chibok abducted school children in Borno State and end to Boko Haram activities in the North Eastern part of the country.

The quiet and heart rendering gathering organized by the office of the wife of the governor in conjunction with the state branch of the Christian Association of Nigeria (CAN), saw the many of the congregation clad in black attire to reflect their pensive mood wept bitterly as they prayed on the security challenges in the country and the possible fate of the abducted school girls.

They offered intercessory prayers to God seeking his intervention on the matter particularly the abducted school girls and other Boko Haram abductees, for peace and unity of the country particularly end to insurgency and blood spilling in the country, wisdom for the leaders and development of the Abia State.

Preaching a sermon, 'Deliverance from Captivity,â€ the Abia State Chairman of CAN, Bishop Goddy Okafor, said that devil is behind those working against the unity this country.

Bishop Okafor who cited various bible passages to buttress the topic stated that the aim of the enemy was to hold the people captive so that they would not offer the sacrifice of praises unto God and put the people in condition of confinement so that they will not be able to allow light to shine.

The man of God stated that they gathered in Umuahia to seek the face of God through prayer for the release of the abducted girls by the Boko Haram sect. .

Pastors Emeka Awa, Silas Ike, Mrs Charity Ogbonna and Mrs Oluchi Abraham, expressed the hope that the prayers offered would draw down the powers of God in the country and ensured the release of the Chibok school girls and an end to activities of the Boko Haram.

They further commended the wife of the governor, Mrs. Mercy Odochi Orji for organizing the solemn assembly for residents of the state to seek the face of God over the security challenges in the country. They expressed the hope that just like the similar solemn assembly led by Mrs Orji in 2009 which led to the release of kidnapped school children in Aba and an end to kidnapping and other violent crimes in the state, the gathering would lead to freedom to the school girls and peace in the country.

The wife of the deputy governor, Lady Nene Ananaba had earlier read the Bible passage taken from Acts 12:1-11 during the prayer service. Some of the clergies praying during the solemn assembly organised by the wife of Abia state governor in Umuahia to seek God's intervention for the release of the abducted Chibok school children. The wife of Abia governor, Lady Nene Ananba, the wife of the Speaker, abia house of assembly, Mrs Vivian Udo Okochukwu and the Commissioner for Women affairs, Mrs nene Nwaejike carrying placards for the release of the abducted Chibok school children during the solemn assembly organised by the wife of Abia state governor in Umuahia to seek God's intervention