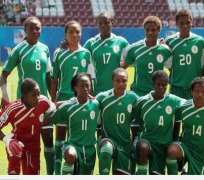 Nigeria's under -20 women football team, the Falconets, resumed full training on Friday in Abuja in preparation for the 2014 FIFA U-20 Women's World Cup scheduled for Canada in August.

The News Agency of Nigeria (NAN) reports that the team trained at the FIFA Goal Project pitch at the National Stadium.

The team had qualified for the competition scheduled for Aug. 5 to Aug. 25 after winning all its qualifying matches against Sierra Leone, Tunisia and South Africa.

The Falconets had scored a total of 31 goals without conceding any goal, beating the three teams home and away.

Team head coach Peter Dedevbo, while speaking on the resumption of training, said 35 players were in camp, from which the players for the World Cup squad would be picked.

According to a statement by the team's Media Officer, Elizabeth Kah, four of the players were from the national under-17 women's team, the Flamingoes.

'The rest are from various clubs in the Nigerian women football league,'' the coach said in the statement.

It also quoted him as saying their training 'will henceforth be more technical so as to get the best players from the squad as none of them can for now lay claim to a shirt''.

Falconets have participated in all FIFA U-20 Women's World Cup finals since its inception in 2002 and came second in 2010.(NAN)