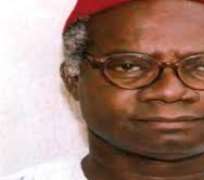 
The Conference of Nigerian Political Parties (CNPP) has called for the immediate suspension of the MD of NEXIM bank, Mr Robert Orya, for alleged dereliction of duty, gross abuse of office and misapplication of the N200bn stabilization and loan guarantee fund advanced the agency by the CBN.

In a press statement issued in Abuja by the Secretary General of the CNPP, Chief Willy Ezugwu, the group alleged that Mr Robert Orya has turned this critical financial agency that promotes investment and stimulates national industrialization drive in the import and export sector into a personal fiefdom through the recruitment of unqualified staff, alienation of directorate and executive staff in the decision making process, favouritism in the grant of loans and gross misapplication of agency fund.


The CNPP is particularly incensed by the allegations that Mr Robert Orya has turned the agency into a one-man show by flouting laid down procedures and extant rules in the disbursement of loans to individuals and corporate organizations. Whereas the NEXIM fund is strictly meant for the stimulation of Nigerian industrial growth and export trade by building the financial capacity of operators in the sector, the group alleged that the NEXIM Bank MD has the penchant of advancing loans to his cronies, friends and godfathers for ventures like the building of hotels, land purchase and property speculation which have no direct bearing on the bank's core mandate. The CNPP charged that Robert Orya cannot hide under the shadowy and near invisible manner the bank operates to perpetuate all sorts of financial impunities without being upon to render the account of his stewardship.


The CNPP thus calls upon the CBN Governor, the minister of Finance and the Financial Reporting Council of Nigeria to commence an immediate probe of Robert Orya's tenure, especially the utilization/disbursement of the N200bn fund made available to the bank and whose poor, improper and injudicious application is allegedly raising deep concern among stakeholders in the sector. Comparing the case with that of Lamido Sanusi, the suspended Governor of the CBN, the CNPP demands the immediate suspension of Robert Orya as the MD of NEXIM bank and the commencement of full-scale investigation of not only the where about of the N200bn fund put in his care but also his entire tenure as the CEO of that financial agency.


The CNPP further purports that rather than put his banking house in order now that his tenure is about to end, Robert Orya has literally abandoned his duty post in his desperate quest for another term in office. The group further alleges that no high-ranking office in the nation's Senate, HOR, the Executive branch and even the Benue state and national leadership of the PDP has been spared Robert Orya's incessant pestering with mouth-watering offer of loans to whoever these officials recommend as a means of securing a second mandate to continue perpetuating the abuse of his official responsibilities.


The CNPP Secretary General declared thus: 'we are watching Robert Orya's antics and desperate moves with keen interest. The CNPP has sent out alert on this matter to civil society/anti-corruption groups with specialization on the financial and banking sector who have began to investigate and compile all his alleged administrative and financial infractions. The CNPP intends to hold a roundtable discussion with our civil society partners on this matter in the next two weeks with a view to devising strategies to ensure that justice is done. Thereafter these groups will commence daily picketing and mass action at the NEXIM Bank headquarters, the EFCC office and the NASS until Robert Orya is removed from office and a criminal investigation/prosecution process against him is launched by the relevant authorities.'