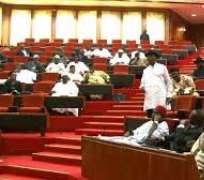 The Senate Committee on Privatisation has enjoined new owners of the Power Holding Company of Nigeria (PHCN) Successor Companies (SCs) to take advantage of existing laws in the various states of the federation to prosecute vandals of electric installations and those who obstruct electricity personnel from performing their legitimate duties.

In a response to a request by the Managing Director of the Port Harcourt Electricity Distribution Company (PHEDC), Mr. Jon Abbas, for the National Assembly to quickly enact a law to prosecute electricity installations' vandals and allied offences, the Committee members led by its Chairman, Senator Olugbenga Obadara, who were on oversight visit to privatized enterprises in Rivers State last week, urged the PHCN SCs, in the interim, to take the measure.

Obadara said the power companies could do that by collaborating with the judiciary in the states to constitute mobile courts to handle all cases relating to electric power infractions.

“We advise you to take advantage of existing laws in all the states of the federation to prosecute electricity installations' vandals and allied offences.

You could collaborate with the Judiciary in all the States to constitute mobile courts to try these offenders.

On our part, both Chambers of the National Assembly will synergize to enact a law on electric power offences in the future”, he said.

While reiterating the Committee's resolve to assist the power companies to overcome their challenges to give Nigerians efficient and uninterrupted power supply, the Chairman warned that “we will not hesitate to wield the big stick when we find you wanting”.

Briefing the members earlier, Managing Director of the Port Harcourt Electricity Distribution Company (PHEDC), Mr. Jon Abbas, informed them that the new owners had upgraded some sub-stations and re-modelled the company for efficiency.

He however listed inadequate power generation, poor network condition, higher AT & C Loss, vandalism, lack of interest by funding institutions and rampant theft of electricity as some of challenges confronting the distribution company.

At Afam Power Station, the Managing Director, Mr. Leo Ofurum, said the plant managed by Nigerian engineers was at present generating 65 megawatts as against the installed 75megawatts. He added that the plant generates N100million monthly for the government.

In his remarks, the Senate Committee Chairman, Senator Olugbenga Obadara, commended the Nigerian engineers for their ingenuity and urged them to co-operate with the preferred bidder for the plant, Talevares Group, to turn it around.