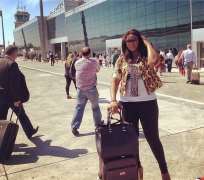 Nollywood gorgeous actress Omotola Jolade Ekeinde, also known as 'Omo sexy' is presently at the Eastern Meditterranean University (EMU) in Northern Cyprus Where she would be delivering speeches on Motivation, Personal achievement and career opportunities.

The one Nigerian actress 'TIME' Most influential personalities of the year 2013, who appears to be launching another career as a motivational speaker shortly after speaking at an entertainment conference which held recently in Lagos, Nigeria, took to the only state university in North Cyprus to inspire the many personalities that would be there to listen to her share some motivational inspirations.

“Landed in Northern Cyprus #EMU.6hours 45 minutes from Lagos to Istanbul, 'Best Airport I have ever been to so far', and I have been around. My dream looks for Nigeria Airport. Updates soon #Motivational speaker. Omotola shared via her social media platform when she arrived Cyprus.

Eastern Mediterranean University is a higher –education institution of technology for Turkish Cypriots, established in 1979 and located at Famagusta, North Cyprus.